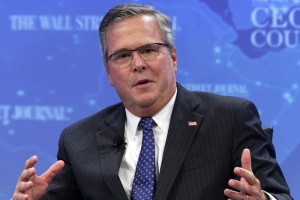 Bush and his PAC, Right to Rise USA, have received significant support from the private equity executives, who had contributed upwards of $13 million as of late July, according to Buyouts’ analysis of Federal Elections Commission data. Significant PE donors and other sources who spoke with Buyouts said they believe Florida Senator Marco Rubio or Ohio Governor John Kasich are among the most viable alternatives to Bush in a Republican field dominated by outsiders like real estate developer and reality TV star Donald Trump and retired neurosurgeon Ben Carson.

Bush’s tax plan — released on September 8 — proposes many changes private equity executives would likely applaud, including chopping the corporate tax rate from 35 percent to 20 percent. But the plan also treats carried interest as regular income and eliminates the deductibility of interest payments, both of which are considered vital by the industry’s lobbying arm.

“Everything but the parts that affect the private equity business are good,” one of Bush’s major private equity donors told Buyouts. “I don’t understand why he or his team included these provisions.”

“When Bush started raising money early on, a lot of it was in New York, and a lot of it is in private equity,” another Republican source with close ties to PE donors told Buyouts after the plan was released. “A lot of the private equity community felt betrayed by Obama after 2008 … Jeb is essentially setting himself up to be the Republican version of Obama in 2016.”

Indeed, as many have pointed out, several aspects of Bush’s tax plan are similar to those proposed by President Barack Obama in 2012. Carried interest has long been singled out as a loophole by Democrats and populist leaders within the Republican party, most notably Trump.

Bush was widely considered to be an “establishment pick” for the Republican nomination, given his political and business backgrounds. He helped launch private equity firm Britton Hill Holdings after leaving office.

Bush’s PE supporters were “surprised” that carried interest and duductibility of interest payments were inlcuded in the tax plan, said another Bush donor who works in the industry. “That part of the plan lacked the economic sophistication you would normally associate with the governor and his advisors.”

The same source went on to say the industry’s complaints have been communicated to Bush’s campaign, and that Bush’s “people are certainly willing to listen,” though it’s unclear and unlikely he would walk back his tax plan.

Several lobbying groups representing the private equity industry and its interests, including the Association for Corporate Growth, Private Equity Growth Capital Council and Businesses United for Interest and Loan Deductibility Coalition, came out against the two elements of the Bush plan when it was released earlier this month.

The Bush campaign did not respond to requests for comment.

The specifics of Bush’s tax plan were particularly surprising given the nature of his base. Bush has struggled to find traction with Republican primary voters — most polls had him trailing Trump, the Republican frontrunner, by double-digits going into the second Republican debate on September 16. Despite limited support from the Republican electorate, however, the Bush campaign and political action committees supporting the candidate collected roughly $120 million as of July 31, more than any other Republican candidate. The total includes $13.2 million from PE donors, according to Federal Elections Commission data.

Even so, Bush’s tax plan went after areas in the code that benefit private equity firms and their holdings. Carried interest would no longer be treated like a long-term capital gain, and could be subject to Bush’s highest income tax bracket of 28 percent.

From private equity’s perspective, the more damning aspect of the plan is elimination of the deduction for interest payments, long considered the lifeblood of the leveraged buyout. Firms often finance buyouts with corporate debt issued by the companies they acquire. Because interest payments on that debt can be deducted, the newly acquired company can often write off a significant portion of its tax obligation. Eliminating the deduction would negatively affect valuations and increase the cost of debt capital, sources said.

“The reality is, the kinds of things he’s talking about, [like] interest deductibility, have been part of the way American business has been done for a century,” said Gary LaBranche, president and CEO of Association for Corporate Growth. “It’s not something that’s going to go easily into that good night.”

Despite the rhetoric and attention Bush’s tax proposal generated, some sources questioned whether he would follow through on his plan. Many sources pointed out that campaign issues highlighted during the primary season often fall away once the real campaign begins, and that voters can only attach so much weight to campaign promises.

“That’s a very specific detail that goes right to their [private equity’s] bottom line,” said one industry lobbyist. “That said, it’s still so early. We’re not even close to the Iowa Caucus yet. I just wonder, is it worth it to get this hyperbolic about it?”

Who gave to Bush?

Unlike individual donations to a candidate’s campaign committee, which are capped at $2,700, politically inclined individuals with deep pockets can contribute as much as they’d like to a super political action committee (super PAC).

The no-limit rule for super PACs made it possible for the primary committee backing Jeb Bush — Right to Rise USA — to raise $103.2 million as of late July. That total was raised from fewer than 5,000 individuals and businesses, which means most of the donations to Right to Rise came with massive dollar amounts attached.

Private equity players — as well the financial services industry at large — contributed heavily. Individuals working for private equity and venture capital firms pumped at least $13.2 million into the pro-Bush super PAC, according to an analysis of Federal Election Commission filings by Buyouts.

Right to Rise’s largest single donor to date is a private equity executive. Miguel Fernandez, chairman of Miami-based MBF Healthcare Partners, has contributed more than $3 million to the PAC.

“If you want a great speaker like Barack Obama or Marco Rubio, that’s not Jeb,” Fernandez was quoted as saying in the The Wall Street Journal. “But if you want a speaker with substance and drive and executive experience, that’s Jeb.”

Right to Rise’s treasurer, Charles Spies of law firm Clark Hill, did not respond to a request for comment.

For a list of the largest individual contributions to Right to Rise, see the table.