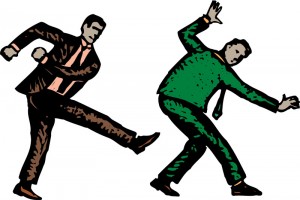 The only thing peHUB readers are as strongly opposed to as raising the tax rate on carried interest may be the ongoing tenure of Desmond “Des” Hague as CEO of private equity-backed Centerplate.

We polled readers with the following question: “The CEO of Centerplate, which is owned by Olympus Partners, is accused of abusing a dog. Should he be fired?”


“Just because you do something stupid and everyone is legitimately and appropriately disgusted by your behavior, that doesn’t mean the ultimate sanction of termination has to be applied,” said Jon Austin of J. Austin & Associates, a Minneapolis-based communications firm that specializes in crisis management.

“If this was the CEO of the ASPCA, there’s no question he’d be gone already,” he said. “In this instance, it’s a judgment call that the board has to exercise.” 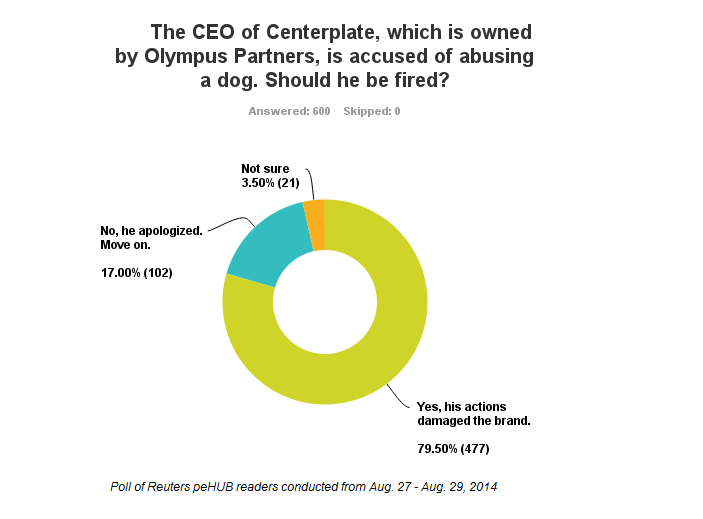 Centerplate, which provides concessions for more than 300 entertainment and sports venues, was bought out by its management in partnership with Olympus in 2012 from Kohlberg & Co.

The company’s board needs to answer two primary questions, Austin said. One, “Does this reflect on [Hague’s] ability to manage the company and exercise good judgment in that activity?”

Two, has the CEO’s behavior “so damaged relations with your constituencies — employees, customers, regulators, consumers, and shareholders if you’re publicly traded? Is that relationship so imperiled where you have to act in the best interest of the company at the expense of CEO?” Austin declined to predict if Hague would remain as CEO.

Hague found himself in the middle of a social media firestorm after video showing him kicking and choking a Doberman Pinscher in a hotel elevator went viral. The story has been reported by more than 200 media outlets, from Fox News to Business Insider to The Globe and Mail.

Hague has publicly apologized for the July 27 incident and Centerplate has placed him on “indefinite probation,” but many would like to see the CEO lose his job. A Change.org petition calling for Centerplate to fire Hague has already collected more than 48,000 signatures. Also, negative comments prompted Hague to close his Twitter account and Centerplate to take down its Facebook page.

Hague issued a statement on Aug. 23 that reads in part: “This incident is completely and utterly out of character and I am ashamed and deeply embarrassed.”

Centerplate issued a statement on Aug. 27 that said it had placed Hague “on indefinite probation” stating any further acts of misconduct would result in immediate termination. Further, Centerplate said Hague would be required to complete 1,000 hours of community service and personally donate $100,000 to create a foundation “in honor of the dog he mistreated in the elevator to help support the protection and safety of animals in the city of Vancouver where the incident occurred.”

Centerplate board censures CEO who reportedly abused dog in his care