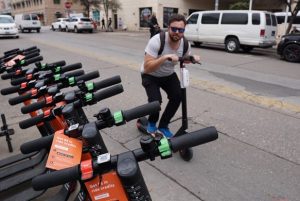 The investment, which closed late April, was made alongside existing investors Spark Capital and General Catalyst.

The global lockdown hit ridership numbers of scooter giants, but Superpedestrian was shielded due to its less significant market exposure, said Daniel Herscovici, partner at Edison.

Talks of combining the two Massachusetts businesses started pre-covid, and only accelerated when the pandemic hit, he said. “It started as an introduction between the investors,” Herscovici said.  “[But] covid created a window of opportunity in micromobility.”

The personal transit growth seen in Asia represented an early canary for the post-coronavirus era, he explained.

Herscovici admitted that, in general, micromobility efforts are not profitable. The struggle lies in delivering profitability on a per scooter basis, he explained. Simply put, the startups should be able to make money in addition to the amount it costs to buy and operate a scooter.

Moreover, the current climate has hit hard on larger players in the category.

But Superpedestrian has an edge in this failing market due to owner economics, according to Herscovici. The company engineers and designs its own vehicles, and thus, “Superpedestrian owns the entire supply chain,” he said.

A space comprising many new and emerging players takes away the first mover’s advantage. But that benefits Superpedestrian in other ways, according to Herscovici. “Bird and Lime gave us a lot of insight in the market,” he said. “There are a lot of lessons learnt.”

Zagster, which previously serviced Spin scooters, partnered with Superpedestrian in Florida in late December. “As markets open back [up], you’ll see half a dozen [Superpedestrian market] launches in June,” Herscovici said.

The mostly all-equity transaction was done through Edison’s $276 million fund, which closed in 2016.

VCs last year invested $1.9 billion into 64 urban transport deals – a sharp drop from the all-time high of $5.4 billion across 61 micromobility deals in 2018, according to a PitchBook report.