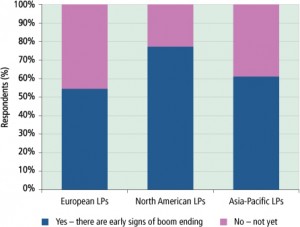 For first-time funds, spin-out groups and firms with spotty track records, the fundraising circuit in 2008 looks like it will be an especially tough slog. Institutional investors are reviewing more funds than ever, and they’re bound to favor firms with established track records and brand names. Indeed, many of the biggest backers have already designated big pieces of their 2008 allocations to funds they know will be coming back to market.

“I’ve had LPs tell me they won’t do any new names—maybe one,” said a buyout pro whose firm is looking to raise new capital in 2008. The pro said 2008 will be the Year of the Re-up. “Conceptually, there is more money out there. But established investors in the asset class will stick with their existing relationships. And it’s far easier for new entrants, who have to educate their boards and CIOs, to go with proven advisers. It’s just much easier to sell groups with long track records.”

Another buyout pro said the fundraising environment is looking more and more like a battle between the haves and the have-nots. “The re-up marketplace goes fast and easy,” the pro said. “The bar to get into a portfolio for the first time will keep going up.”

To be sure, buyout firms looking to raise money in 2008 will enter the year with a considerable tailwind at their backs. LPs across the board are increasing their allocations to private equity or entering the asset class for the first time. “You’ve got a great macro theme playing out, especially as the public market is proving to be more volatile,” said Dan Vene, an associate at placement agent C.P. Eaton.

According to a recent survey of LPs by British secondary buyer Coller Capital, 96 percent of institutional investors worldwide expect to boost their allocations to private equity in the next three years. Moreover, more than three-quarters of those surveyed said they would increase their number of GP relationships.

For now, however, that seems to be the minority view. The Coller Capital survey, for instance, spells out the paradox that lies at the heart of the fundraising climate. Although more money is going into the market, there’s a sense that the party is over. Nearly 80 percent of respondents said they saw signs of an end to the buyout boom.

“We’re all doing the same thing—paring back relationships and consolidating capital,” said one LP who’s entering 2008 with the goal of reducing the number of firms it backs. According to the LP’s data, U.S. firms in 2006 raised 6x the capital they deployed. That’s up from 4x in 2005 and 2x in 2004. In all likelihood, 2007 will maintain the upward trend, especially given the fall-off of investment pace in the second half of the year.

This suggests that LPs should brace themselves for lower returns. That, in turn, will prompt investors to stay with the GPs that have demonstrated they can make money. “Things have to be going well to feel like you can take a risk on a newer team,” the LP said.

In that sense, 2008 is shaping up to be an extension of 2007. Newer and more unproven funds will hit resistance from investors while home run-hitting GPs will simply open their gates to let familiar faces stream in and close them just as fast, shutting out would-be suitors. Firms such as Black Eagle Partners, a spin-out from Questor, have struggled for more than a year to reach their targets, while others such as Hammond Kennedy Whitney, based in Indianapolis, gutted it out for more than a year before hitting its $185 million target for its third fund last month. This fall, Carousel Capital, the firm co-founded by Bill Clinton’s former chief of staff, Erskine Bowles, quit fundraising at $210 million after missing a $300 million target.

For a new team, the fundraising cycle will still take as long as two years, said Mounir Guen, CEO of placement agent MVision. The likely cap on a first-time fund is $300 million, although $200 million is a more likely target.

For spin-out teams that can tout a track record, fundraising will be much easier, although modesty is essential, Guen said. Core investors will follow a seasoned team when it launches a new fund, but a spin-out from a $5 billion fund, say, should aim for no more than $750 million. A higher target will require more explanations for LPs at a time when they are already overtaxed in vetting commitments.

Our LP source said the only new teams he’d consider would be those that aren’t really new teams at all—seasoned pros who bring a discernible track record to their new firms. If a GP doesn’t fit this criteria, “I think the environment has got to be tough for them,” the LP said.

In light of the tight market, one strategy new groups are using is to tailor their pitch to the moment and accentuate strategies that sound good at a time when defaults are expected to climb and large-market deals hardly exist. C.P. Eaton’s Vene, for instance, is shopping a client that has an in-house turnaround team. Lo and behold, that information takes a prominent spot in the PPM and is front and center on the road show. That manager, he said, “is getting the most traction right now” among funds the placement agent is marketing.

Other firms are emphasizing their small size as a way to distinguish themselves from larger firms more exposed to the vagaries of the debt markets. Vene, for instance, said C.P. Eaton talked one of its clients into down-sizing its fund target from $500 million to $300 million, believing the small-market angle would differentiate it from the field.

Other firms, such as Circle Peak Capital and Bard Capital Partners, have taken to completing a series of one-off deals, building a track record they hope will become the basis for a first-time institutional fund. It’s highly probable the landscape will see more of these types of firms as the fundraising climate becomes more fragmented.

Although LPs are smart enough to see through a faddish gesture—such as exaggerating a firm’s experience in distressed investing—they’re not indifferent to prevailing winds. The irony, of course, is that committing to buyout funds is supposed to be about insulating investors from short-term swings in market conditions. Six-year lock-ups and 10-year fund durations are designed to create a long-term, patient investment strategy.

But “there’s still a human being on the other side of the table,” Vene said of pitching funds to LPs. “You always want to seem up to speed with the times. You don’t just talk about your 10-year track record. Now you have to mention how you are going to play in this new environment.”