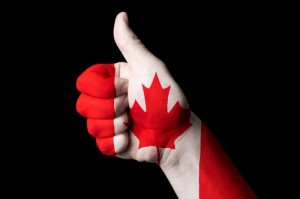 Canada ranks in the top quartile of G20 countries when it comes to fostering entrepreneurship, according to a new report by Ernst & Young. The findings of EY G20 Entrepreneurship Barometer 2013 are based on a survey of 1,500 entrepreneurs, who answered questions about tax burdens, access to financing, education and training systems and other factors. Access to financing was a primary concern for 70% of the respondents. The other top-quartile countries were Australia, South Korea, the United Kingdom and the United States.

Entrepreneurs call on G20 to stimulate job creation and growth

With many countries continuing to face high levels of unemployment and challenges in economic growth, EY’s G20 Entrepreneurship Barometer 2013 calls on governments, ahead of the G20 Leaders Summit next week, to collaborate with entrepreneurs in order to kick-start their economies and create jobs. The barometer follows the EY report, Avoiding a Lost Generation, which was launched at the Young Entrepreneurs Alliance Summit in Moscow in June.

“Despite their differences, there are many common challenges for entrepreneurs and governments across the G20. For most countries the agenda remains closely focused on job creation and the barometer highlights that there are things the public and private sector can do simply by learning from each other.

“Easier access to funding, simplified regulation and taxes, and bolstered education and training, have already helped to improve the entrepreneurial ecosystem in many countries and governments are already closely connected. But they need to exchange best practices and avoid any pitfalls or unintended consequences that others have already encountered.”

Launched ahead of the G20 Leaders Summit in St Petersburg next week, the EY G20 Entrepreneurship Barometer 2013 is a new way of ranking every G20 country across five “pillars” of the entrepreneurial ecosystem: access to funding, entrepreneurship culture, tax and regulation, education and training, and coordinated support. The barometer is based on a survey of over 1,500 leading entrepreneurs and qualitative data on entrepreneurial conditions across the G20. It also draws extensively on EY’s own research of more than 200 government leading practices

The barometer provides more than 40 key recommendations for governments, entrepreneurs and corporations to improve the conditions for entrepreneurship to stimulate growth and jobs.

Across the G20, mature countries score highest overall on the barometer for providing the best ecosystems for entrepreneurship. When ranked across all five categories, Australia, Canada, South Korea, UK and US lead the G20 in the upper quartile. The US leads the barometer in terms of access to funding and entrepreneurship culture and France is top for education and training. However, rapid-growth markets are closing the gap and making the fastest improvements to their entrepreneurial environments. Saudi Arabia is perceived to be the most attractive in terms of tax and regulation due to its low corporate tax rates and simplified regulations. Within the final pillar, providing “coordinated support”, including mentoring and peer to peer networks, Russia scores highest, followed by Mexico and Brazil. See the table below for more details.

Entrepreneurs represent two third of employment in the G20 and they are a critical engine for job creation, including youth employment. Across the EU it was estimated that entrepreneurs supplied 67% of all new jobs last year, while in China the figure was even higher at 75%. Maria Pinelli, EY’s Global Vice-Chair, Strategic Growth Markets explains how job creation can be reinforced,

“In order for G20 governments to continue to stimulate job creation there is a need to support entrepreneurship by attracting migrant entrepreneurs as truly global talent base, treating women entrepreneurs as a major market in their own right, and incentivizing young entrepreneurs. Entrepreneurs have the power to create jobs and drive growth — but first we need to give them the tools and environment that will enable them to succeed.”

Access to funding is cited as the top priority for global action by 70% of entrepreneurs, who agree that obtaining finance remains difficult as their businesses grow and develop, and the sources of finance they rely on changes. The barometer highlights that governments should create a range of mechanisms and institutions that provide entrepreneurs with capital at every stage of growth, alongside providing support and mentoring, which is essential to enable entrepreneurs to use this capital effectively.

The US ranks highest overall for providing access to funding, followed by UK and China, with a varied mix of developed and emerging markets following in the subsequent ranking order. While in the US only 15% of entrepreneurs report that it is very difficult to find funding, in countries such as Italy and Argentina this figure is much higher at 45% and 40%, respectively.

Access to early-stage funding is starting to improve, with the US, Canada and Australia as well as Saudi Arabia and Indonesia performing well in providing funding for start-ups. Further innovation is required to broaden the early-stage funding eco-system. This includes large corporates venturing sources of funding to boost their own innovation pipelines while supporting entrepreneurial business.

Companies would also benefit significantly from relief on indirect taxes which often serve as a fixed overhead expense Eighty-three percent of entrepreneurs agree that an innovation focused tax incentive would improve entrepreneurship in their countries. For example, in Canada, entrepreneurs can recover 50% of all their research and developments’ expenses, regardless of profit or loss.

Pinelli says, “Given the scale of this problem in certain markets in particular governments have to be innovative. Entrepreneurs are looking to their governments to incentivize new sources of funding whether it is unlocking bank lending to entrepreneurs, providing public funds, crowdsourcing or microfinance. Being creative can be a demonstrable success – nearly half of the entrepreneurs who are aware of crowd funding agree that it has improved their country.”

Call to action for governments

Alongside financial improvements, there is a clear message from entrepreneurs from G20 nations for cultural change in order to remove the stigma of failure, champion entrepreneurship, promote united thinking in policy and business environments, and co-ordinate support across private, public and voluntary sectors. US entrepreneurs have a relatively low fear of failure. In fact, 43% of US entrepreneurs surveyed see business failure as a learning opportunity, which compares to the G20 average of 23%. Relatively low insolvency implications also support US entrepreneurs in trying new ventures. In order to better understand the challenges ahead, the report also advises governments to conduct a self-assessment of their own entrepreneurial landscape to ensure that the correct funding strategies and policy levers are in place.

Schreiber concludes: “The message is clear – governments, entrepreneurs and corporates have to work together to spur growth across the G20. For governments, there is a clear call to action to both improve financial and regulatory environments to better support entrepreneurship but also to do more to encourage an entrepreneurial culture. As well as directly boosting access to funding public policy also needs to consider a more long term holistic approach to innovation and enterprise.”

EY is a global leader in assurance, tax, transaction and advisory services. The insights and quality services we deliver help build trust and confidence in the capital markets and in economies the world over. We develop outstanding leaders who team to deliver on our promises to all of our stakeholders. In so doing, we play a critical role in building a better working world for our people, for our clients and for our communities.