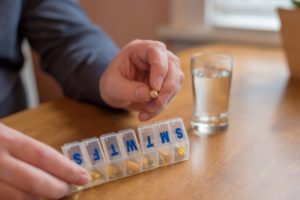 Four years into its investment, Nautic Partners is evaluating the sale of ExactCare Pharmacy, five people familiar with the process told PE Hub.

Baird is providing financial advice to the Valley View, Ohio-headquartered company, three of the people said.

ExactCare generates EBITDA in the $30 million to $40 million range and could trade for an EBITDA multiple in the low teens, some of the sources said. Another source disagreed, suggesting a high teens multiple is more likely considering the limited opportunities of scale in the space.

One source characterized the auction as a “hot process” in its early stages, while another said ExactCare has garnered a good amount of private equity interest.

Founded by CEO Dale Wollschleger in 2009, ExactCare is a pharmacy company focused on serving medically complex patients in their homes. The company specializes in serving individuals with chronic conditions that need assistance managing multiple medications.

Nautic, headquartered in Providence, Rhode Island, recapitalized ExactCare in March 2016. The investment was made through Nautic Partners VII.

Nautic invests in middle market companies across the healthcare, industrials and services industries.

A range of pharmacy and pharmacy services companies have seen activity in recent months.

Sheridan Capital in January invested in TarryTown ExpoCare in a deal assigning the specialty long-term pharmacy business an enterprise value of $160 million, sources familiar with the matter told PE Hub. TarryTown focuses on serving individuals with intellectual and developmental disabilities.

On the hospice pharmacy benefit management side, Consonance Capital Partners in December sold Enclara Healthcare to health insurer Humana in a transaction valued in the zip code of $700 million to $840 million, PE Hub reported.