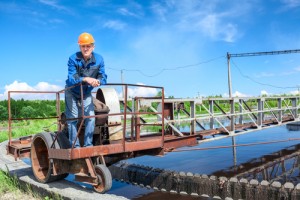 It is the second asset that Danaher is pursuing in partnership with Blackstone following their participation in an auction, currently underway, for Johnson & Johnson’s clinical diagnostics unit that could fetch $4 billion.

The partnership could offer Blackstone an edge in what is shaping up to be a popular auction with private equity firms. Apollo Global Management LLC ; Bain Capital LLC; TPG Capital LP; Onex Corp ; Advent International Corp; Rhone Group LLC; Clayton, Dubilier & Rice LLC and Goldman Sachs Group Inc’s private equity arm are among the firms that are also through to the second round of bidding for Ashland’s water technologies unit, other people familiar with the matter said this week.

The water technologies business has earnings before interest, tax, depreciation and amortization of roughly $200 million and could fetch eight times that amount, the people said.

The sources spoke on condition of anonymity because details of the auction are confidential. An Ashland spokesman declined to comment while representatives of the private equity firms either declined to comment or did not respond to requests for comment.

Ashland’s water treatment business, the third largest among the company’s four units, supplies chemicals to industries including pulp, paper and mining. The business also makes products such as biocides, coagulants and wood adhesives.

Under pressure from activist investor Jana Partners LLC, Ashland said in July it had asked Citigroup Inc to help review options for the water technologies unit.

Earlier this month, Ashland said that a sale process was underway and expected to wrap up in the first quarter of 2014. Ashland added that it expected to use proceeds from the sale primarily to fund share buybacks.

The company appointed John Panichella, a senior vice president at Ashland and who has more than 25 years of experience in global water markets, to lead the water technologies business in October.

Ashland and other large U.S. chemical companies, including DuPont and Dow Chemical Co, are looking to sell their non-core, cyclical assets and focus on businesses that generate higher margins even during downturns.

Such corporate carve-outs have proved to be a major source of dealmaking for buyout firms active in the industrial sector. In February, for example, Carlyle Group LP acquired DuPont’s performance coatings business for $4.9 billion while Cinven Ltd bought Rockwood Holdings Inc’s ceramics business in September for $2 billion.

Ashland has also initiated the sale of its rubber business, which primarily serves the North American replacement tire market. It said this was part of its continuing plan to shave off non-core assets.