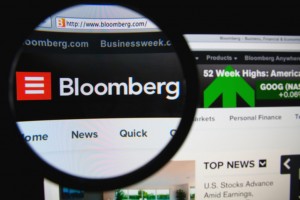 Wall Street firms led by Goldman Sachs Group Inc are close to buying a stake in chat and instant messaging startup Perzo Inc in pursuit of an alternative to a similar application from Bloomberg LP, sources familiar with Goldman’s plans said.

Banks are trying to cut costs as sluggish trading volumes and higher regulation weigh on revenues. Bloomberg has dominated messaging on Wall Street for years, but its application is part of a data, trading and news terminal that costs about $20,000 a year. The Perzo applications are free.

The companies, which have received term sheets for the deal and signed non-disclosure agreements in recent days, either declined to comment or did not respond to requests for comment in time for publication.

Perzo is a Palo Alto, California-based startup founded by David Gurle, who declined a request for comment. Perzo’s application differs from Bloomberg’s in that it is “open-source,” meaning customers can plug it into their systems and alter it as they see fit, whereas Bloomberg customers have to buy the entire terminal, and can’t just buy the messaging system and adapt it.

Banks have been looking for messaging alternatives to Bloomberg’s closed system for years and have had limited success because the Bloomberg system is used by so many on Wall Street. One source compared Bloomberg to Blackberry, whose product dominated the smart phone market until Apple came out with its iPhone.

Thomson Reuters, which competes with Bloomberg in news, data and analytics, has a chat system with more than 200,000 users in its directory, compared with Bloomberg’s 320,000.

“Bloomberg is a very tough ecosystem to break,” said Jefferies analyst Dan Dolev. “People say it is the most expensive social network system in the world.” Bloomberg’s rise began in the 1980s when it became a prime source for data and analytics about bonds.

To succeed, a bank messaging system must be secure, because of the sensitive information transmitted through the application. It must allow for central monitoring, so compliance staff and other officials can monitor conversations to make sure the bank is following securities trading regulations.

Goldman Sachs has been looking at alternatives to Bloomberg’s messaging program for years, and launched a project internally called “Babel” in early 2013 to develop a competitor, according to two sources.

As that project was underway, the bank learned that reporters in Bloomberg’s news division had access to information about bank professionals that it assumed had been private, such as when an employee had last logged into his or her terminal, the sources said.

The discovery strained relationships between Bloomberg and Goldman, as well as other large financial clients. Bloomberg publicly apologized and changed its policy to bar reporters from accessing client data.

The Babel project has been led by Goldman’s Chief Information Officer R. Martin Chavez, who has spent much of his career building technology for the Wall Street bank, the sources said. Darren Cohen, who heads Goldman’s principal strategic investments group, got involved when it was decided that it might be easier to simply buy a startup that already had technology that could help meet Babel’s goals.

Goldman recently reached out to other banks to get them involved, the sources said.