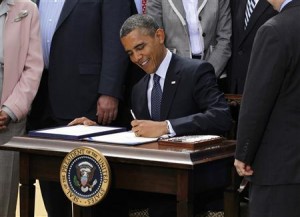 President Barack Obama signed the JOBS Act into law on April 5, surrounded by VCs and entrepreneurs eager to get the next generation of startup investing off the ground.

“Who knows, maybe one of them or one of the folks in the audience here today will be the next Bill Gates or Steve Jobs or Mark Zuckerberg,” the President said.

Well, maybe not Zuck. And maybe not soon. The SEC is still yet to issue any kind of ruling on the legislation, and hasn’t made clear when it might do so or what it might say.

There remains a chance that when it clarifies its position, the Securities and Exchange Commission may stop crowdfunding in its tracks. There may be a huge, and growing, crowd looking forward to the new asset class, but right now, crowdfunding is just jogging in place. One thing is for certain: it isn’t likely that the SEC will make a ruling prior to this year’s elections.

The retail investor backlash that is taking place over the Facebook IPO—and how it was handled by Nasdaq and the bankers and analysts that were most familiar with it—could wind up coming home to roost on Capitol Hill, and at the worst possible time for the Obama Administration. All of a sudden, investor protection is front and center again; the market has erased all of its 2012 gains and jobs aren’t as plentiful as pundits were projecting. Why would the SEC take the opportunity to look as bad as it did in 2008 by hastily approving legislation that, effectively, might require investors to check their proverbial trunks at the door in order to swim in the ocean of entrepreneurs?

“The SEC can, and probably will, extend” the agency’s deadline to issue rules on crowdfunding, says Berkeley Geddes, CEO of Grow America Insight, a startup funding organization. Right now, the agency is taking comments and suggestions as it prepares to issue a ruling. “There was some talk and hope it could happen sooner.”

So who will do the backing, once—if—the SEC OKs crowdfunding? Increasingly—in the wake of Gates and Zuckerberg humiliating Harvard en route to billions—institutions including Cornell, Stanford, Michigan, Ohio State and others have laid out new seed programs to back (and hopefully retain) entrepreneurs. There are already tech seed camps galore, overflowing with entrepreneurs’ applications. Separately, limited partners in VC funds say almost unanimously they either have no clue what crowdfunding is or no desire to allow their capital to be invested via the strategy, and, often, both. VCs privately acknowledge they won’t do much investing via crowdfunding, either—that is, if their LPs even permit it. It isn’t clear who will fund crowdfunding, aside from a portion of the investors that just lost their shirts on Facebook.

Universally it seems, privately, crowdfunding proponents say they anticipate some form of fraud—and it is buyer beware out there.

“We absolutely do not vet anything” that Indiegogo helps to obtain funding, said CEO and co-founder Slava Rubin, at a recent crowdfunding event hosted by The Soho Loft. Right now, the Indiegogo platform supports donation-backed projects only; equity compensation in exchange for crowd-sourced capital is not currently legal, and at the heart of the language President Obama signed earlier this year. The SEC will have to structure rules around it, or simply hope for the best. In the future, platform operators like Rubin might find themselves compelled by the SEC to do more to inform and protect investors. And they might have Facebook and Mark Zuckerberg to thank for it.