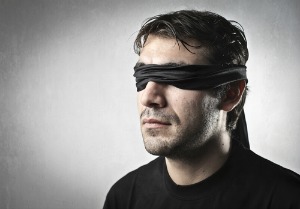 Venture capitalists have been blinded in recent years by consumer technologies – but the real opportunity lies elsewhere.

In the consumer internet and business-to-consumer (B2C) categories, there have been some dazzlingly large acquisitions – it’s hard not to be mesmerized by deals such as the $1.65 billion dollar acquisition of YouTube less than two years after the company was founded, or the more recent acquisition of Instagram by Facebook for $1.1 billion dollars. As a result, investors have flocked to B2C deals: from 2006-2010, investment in B2B start-ups declined by 35% while investment in B2C start-ups tripled.

However, a coolheaded look at the broader numbers shows that B2B is most often a better investment.

The facts are clear: B2B investment outcomes exceed B2C in both IPOs and M&A transactions. 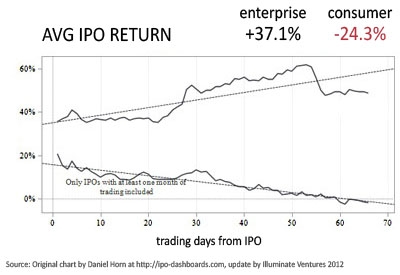 Similar performance differences exist in M&A outcomes for B2B versus B2C companies. A comparison of the top 100 M&A transactions with published revenue multiples in B2B and B2C over the past two years (50 of each) shows that B2B outcomes were realized at significantly higher revenue multiples than B2C – typically 2x higher or more. The same pattern of B2B outperformance is evident when looking at the total transaction values. B2B M&A deal sizes are typically 2.5X that of B2C, across the board. 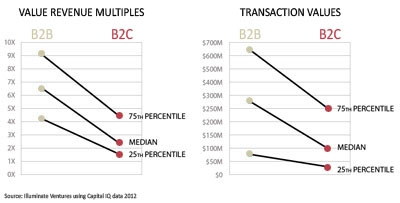 This differential in M&A outcomes is due, in part, to the fact that B2B companies are typically building deep technology and thus have intellectual property that is of intrinsic value to corporate acquirers who are cash rich and R&D poor in many cases. Recognizing that business buyers are shifting rapidly away from traditional enterprise solutions towards cloud-based applications – many established organizations are looking for ways to rapidly reinvent themselves – to move rapidly into the world of SaaS/cloud computing and mobile enablement. Unfortunately, most simply do not have the internal resources/skillsets to make this happen quickly and so choose to be proactive in bringing both new products and the associated talent into their companies via acquisition. Even at the low end of an M&A exit, these corporate acquirers take an “aqui-hire” view of an acquisition – frequently paying a premium for a company that brings them a team with the deep and relevant skills they lack.

Perhaps more important than any of the other factors influencing the higher M&A revenue multiples and better post IPO performance is the fact that the subscription SaaS business models create more stable companies: they have a more predictable recurring revenue stream. This makes them an attractive asset to own.

Early stage B2B investing has historically been less popular with investors because, in the past, B2B companies have required larger initial investment and had less potential for a rapid outcome than B2C companies. The positive impact of cloud computing showed up earlier in B2C, with small teams bootstrapping companies to rapid growth. More recently, however, many B2B companies, including several in our own portfolio, have shown that B2B companies can be just as capital-efficient as B2C companies in their early years ….and they offer several other advantages. B2B companies have lower failure rates, better after market IPO performance and better M&A outcomes.

Large scale B2B acquisitions have become increasingly common and that trend is unlikely to end any time soon. Of the 10 most active acquirers in software in the last 5 years, 8 out of 10 are B2B companies. And of the software companies with the highest cash equivalent balances as a percentage of assets, the majority are also B2B. 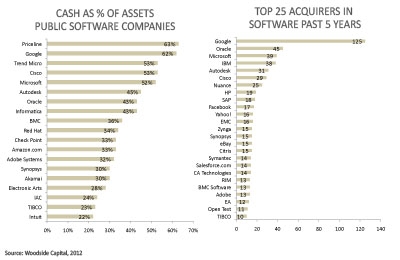 Cloud computing has ushered in a period of high investment, as many businesses are switching to a SaaS model for their IT investments. The forecast for growth in IT spending for 2008-2014 is 4X as high for SaaS solutions as for traditional on-premise offerings (15.6% CAGR versus only 3.4%).

Cloud based solutions and their associated subscription revenue models solutions have also enabled market expansion in the B2B world. New sectors of sales opportunity, such as small to medium business (SMB) are now profitable to target. And, since SaaS solutions most often don’t require expensive upfront costs for integration and offer monthly subscriptions versus on-time large payment models, the sales cycles are shorter and expensive outside sales teams are often no longer required. One of Illuminate’s portfolio companies, for example, has grown to over $20M in recurring revenue in 3 years using only a small inside sales team and less than a $10M in total spend to get there.

It’s a perfect storm for the B2B opportunity: it takes less money than ever before to build a B2B company, exit options are increasing and the market size is roughly 20% larger than B2C and growing rapidly. There is more opportunity for both larger and more rapid outcomes. For example, SlideShare raised just $3M dollars before it sold to LinkedIn for $119M and DemandForce was acquired by Intuit for $424M after raising less than $12M – both within 3 years of their initial financings.

It may be that the lack of investment in early stage B2B is also partially a historical accident: the many angel investors and the majority of micro VCs come from a consumer Internet background, so they have understandably been investing in what they know best and where they can add value. Our firm, Illuminate Ventures, is one of the only micro VC firms that focuses entirely on B2B cloud computing, but we are increasingly syndicating our investments with other traditionally consumer-oriented VCs as consumer technologies are being rapidly adopted within the enterprise. It makes for great collaboration opportunities. The concept of “enterprise consumer” solutions is the marriage of B2B with the best of B2C.

We’re entering a period of tremendous potential in the B2B space – and for investors and entrepreneurs alike, it’s now increasingly being seen as “the” place to be.

Cindy Padnos is the founder and managing partner of Illuminate Ventures. Opinions expressed here are entirely her own.