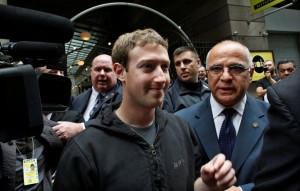 (Reuters) – Newly issued shares in Facebook Inc may have a hard time in the coming week if lead underwriter Morgan Stanley stops supporting the stock and managers lower down in the IPO book who were hoping for an early surge decide to get out before going underwater.

Facebook on Friday sold 421 million shares of stock in a deal that valued the company at more than $100 billion. But investors, expecting a first-day pop in price, instead saw it close just 0.6 percent above the IPO price at $38.23.

As the underwriter, Morgan Stanley stepped in to support Facebook’s stock when it fell toward its $38 IPO price shortly after it opened, a source familiar with the matter told Reuters. The shares spent much of the last hour of Friday trading near that price, with onlookers watching to see if it would post a $37.99 price – which it did not.

But the bank will not support the stock indefinitely, analysts said, and once that firepower is gone, funds that received IPO stock looking for a bounce may decide to bail as well.

Lead underwriters in a stock essentially “short” the stock through what is known as an “over-allotment” of shares – they sell shares to the market that they do not own. If the stock has trouble, which Facebook did, the underwriter supports it by then buying more stock at the IPO price.

Had Morgan Stanley bought all of the shares traded around $38 in the final 20 minutes of the day, it would have spent nearly $2 billion. The “green shoe” overallotment, which can be used to support Facebook’s stock, is 63 million shares. At $38 per share, that amounts to $2.4 billion in firepower.

In an IPO where the stock rises significantly, the green shoe is typically exercised in the days after the debut and the company raises that additional amount. If Morgan Stanley shorted the full amount and bought shares on the open market to support the price, Facebook will not raise the extra $2.4 billion from the IPO.

“Right now you have one big buyer, Morgan Stanley,” said a former chief operating officer for Bear Stearns, who dealt with IPOs on the investment bank’s syndicate allocation committee, but asked not to be named as he did not want to talk publicly about the issue.

“That’s what people are trying to figure out, how much of the shoe is left,” he said. “In most deals, on the Friday that would be it; come Monday, it would be all bets are off, by Tuesday for sure.”

That opens the door for short-sellers and institutions looking to get out. Short-selling is expected to be limited for a few more days. A prime broker on one of the lead underwriters said Friday that they would not be lending shares at least until settlement, which comes three business days after pricing.

In addition, with the stock market in correction mode as investors fret about Europe’s ongoing debt crisis and the outlook for global growth, the environment for a new stock is not ideal.

That could mean the stock’s fate will depend on the strength of the IPO anchor orders – the big clients at the top of the IPO book, who see Facebook as a core holding – as well as a host of retail clients who are less likely to sell their shares quickly and may even be enticed to buy more.

“It is very likely to dip under $38, particularly if overall market conditions deteriorate,” said Mohannad Aama, managing director at Beam Capital Management in New York. “Morgan Stanley will continue to defend the $38 price, but that support is not endless.”

In the end, Friday’s action suggests the IPO was truly priced to perfection. The company increased the amount of shares being offered last week and boosted the original selling price. Brokers at a number of broker-dealers told Reuters their clients were getting as much, if not more, than they expected.

That is what disappointed those expecting a 10 percent to 30 percent pop in the shares – rather than seeing the stock fall back to its IPO price shortly after opening.

“A Herculean effort by the underwriters, I would call it,” said Jeff Matthews of hedge fund firm Ram Partners. “How could it be a hot deal if all the usual mutual fund suspects already own some going into the IPO?” he added.

The classic move by an underwriter to stop an IPO from “breaking issue” worked, if only barely.

Given the technical issues that plagued Nasdaq, with the stock opening about 30 minutes late and delays in receiving order confirmations continuing throughout the session, it is also hard to know how much Friday’s action reflected reality.

“You really don’t know how that left people, whether there were sellers who put in limits that weren’t executed,” said Rick Meckler, president of investment firm LibertyView Capital Management, a hedge fund with $1.3 billion in assets. “I don’t know if people stepped away at some point because they just couldn’t execute in a clear manner, and that Monday we will have some follow through of people that weren’t executed and still need to sell.”

It’s retail investors who stand to get hit the most if trades aren’t executed properly, said Tim Pollock, professor of management and organization at the Pennsylvania State University.

“This is a situation where small investors are more likely to be affected because of the sizes of the orders they’re putting in,” he said.

“If Fidelity is saying they want to buy two million shares that’s going to take priority over the smaller trades. As a regular retail investor placing orders through TD Ameritrade or Schwab you’re at the back of the bus relative to institutional investors so you’re hostage to the system.”

One RBC broker said that with hindsight he was grateful that he was allocated just 500 of the 20,000 shares he requested.
Others had similar relief. Said John Lane, founder of Lane Capital Markets, a small broker-dealer in Fairfield, Conn., that has managed about 40 initial public offerings: “Many retail and institutional buyers were floored at how much stock they got.”

Lane said he spoke with a hedge fund manager and a mutual fund manager who sent buy indications to more than a dozen brokerages on the theory that they would get a fraction of what they desired. “One got filled everywhere, and the other more than he wanted. They’re both sweating right now,” said Lane, who admits he bought shares near the end of the trading day at a little over $38.04.

If shares fail to recover in coming days, retail investors who were lured back into the market by the Facebook frenzy may revert back to the caution that has slowed trading since the 2008 market crash, some brokers fear.

Those who want to take bets against the company will not be able to do so through the options market until May 29. Activity in options of companies like Zynga suggests investors are using those to hedge against their position in Facebook.

Facebook’s lackluster debut also had a knock-on effect on other social media stocks, which dropped sharply on Friday. LinkedIn, Groupon, Pandora Media and Yelp all fell at least 5 percent on Friday with Yelp losing 12 percent.