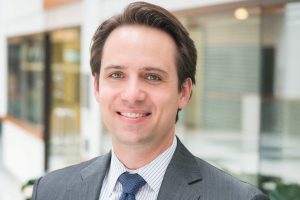 Trevor Rich in 2010 joined Lovell Minnick Partners, where he has focused on financial technology. He was promoted to partner in January. Lovell Minnick, Radnor, Pennsylvania, was once known for its asset-management deals but has expanded into business services, specialty finance, insurance and fintech.

Strategics are buying up many U.S. payments companies. This is causing larger buyouts to shop outside the U.S. for deals. Is there still a market in the U.S. for payments?

We do think there is an opportunity outside the U.S. in terms of payments, but we’ve not spent any time there. We still think there’s an opportunity here in the states and we are focused on those. It’s clear that it’s a bit of a seller’s market. Valuations have been high. You have to really pick your spots here and make sure you are looking at areas that can bring value beyond the standard PE capital. That’s what we’re focused on. I do think there are a number of established payments players out there, much more in software and the acquiring side. We’ve seen that channel evolve as an opportunity for PE in recent years.

There is lots of interest in insuretech but it’s still very much an early-stage opportunity. You’ve seen lots of VC and corporate VC activity [there]. Lots of early players in the space are focused on disruption, creating a full-stack insuretech play. They’re going around established insurance carriers or agents. We’ve seen a bunch of models try to do that. Like many areas in fintech that get attention in VC, those that tend to attract pretty high multiples, a lot of those are focused on revenue multiples, a lot of them aren’t cash-flow positive yet. While it’s an opportunity from a PE perspective, it presents a challenge from both a stage and a valuation perspective.

What do you think about blockchain?

This is a topic that we could talk about for hours. Clearly, it’s complicated. There are investors who are probably making less educated bets on the space. Our view is that there will be practical applications for blockchain in development and it might have an impact in the next few years. Not necessarily crypto. We as a firm won’t invest in cryptocurrency. That market at this point is highly speculative. We see broader applications for blockchain. Those applications will filter their way to financial services. I don’t think they will be an overnight disruptive force where markets are altered overnight because of a business process powered by blockchain. I don’t think it will disrupt existing players as much as it will be adopted by existing players and do things more efficiently. And [it will] likely lower the costs, which will flow to the end consumer. There is a lot of opportunity there but not an area we will be investing in at this point.

What do you think of online lending?

I think the space will continue to evolve. … Any lending platform, whether digital or traditional brick and mortar, it’s best to have a diversified set of funding sources — having warehouse lines, having a marketplace, having access to the securitization market — should all be utilized. What has changed in the digital lending landscape is that much of the value is more about the customer experience. Is there a way to more seamlessly source, originate and underwrite loans that enhance credit quality and, at the same time, improve speed that these loans are made? That’s the true change in an industry that recognizes the need to improve.

Someone mentioned the other day that private equity may once again invest in banks. How likely is this?

I don’t see banks as an area for private equity investment absent a significant market correction. Banks are trading at fairly healthy multiples, so it’s not an opportunity for PE-like returns. We’ll have to see multiples come down to near book level before we see interest [from] PE again.