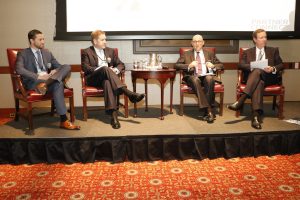 Limited partners are often more aligned with a new manager raising a first or second fund than with a highly in-demand manager who can dictate terms.

That’s according to Jason Andris, managing director of Venture Investment Associates, speaking on a panel at the Emerging Manager Connect East 2017 conference July 26 in New York City. LPs and GPs converged at the conference to discuss the intricacies of matchmaking between institutional investors and up-and-coming fund managers.

Joshua Sobeck, a partner at 747 Capital, offered a similar assessment. “The less capital managers have, the more precious that capital is to them, and the more careful they are with that money,” he said. “As funds grow, the capital becomes less precious and the values become misaligned.”

But just because a firm is smaller and more nimble doesn’t mean it’s a safer investment, Andris cautioned. “By the same token, you’re adding a ton of risk,” he added.

Given the risk that comes with entrusting funds to an unproven investor, LPs who spoke at the conference emphasized the importance of researching a fund manager’s previous deals and a new team’s shared work history.

“The main issue is an attributable track record,” said Eric Hanno, a managing director at AlpInvest. “We have established deal professionals inside bigger firms, but it’s hard to figure out if they owned the sourcing” on a deal.

It can take phone calls numbering in the “40s or 80s” to get a clear picture of a new manager’s track record at his previous firm, Hanno said.

“Where did investment judgments happen in the prior organization?” said Gordon Hargraves, a partner at Private Advisors. “It’s a tough one to get a handle on.”

And it’s critical for new fund managers to have worked together before, he added. Partners might have been best friends since childhood, “but money changes everything in a relationship,” he said.

“There’s nothing like having equity capital on the line to see how people are going to behave under pressure,” added Sobeck.

And proving to skeptical LPs that investing with a first-time fund is a sound move can take months and plenty of rejection.

Nickie Norris, general partner at New Heritage Capital, said she reached out to nearly 400 LPs and pitched to around 160 before gaining commitments from 24 investors, a process that took around 12 months.

“Founding a private equity firm is like renovating your house,” said Rowan Taylor, a founding partner at Liberty Hall. “It takes twice as long and costs twice as much as you thought.”

Panelists from a keynote at the Emerging Manager Connect East 2017 conference July 26 in Manhattan. Photo by Robert Daniel, Buyouts.