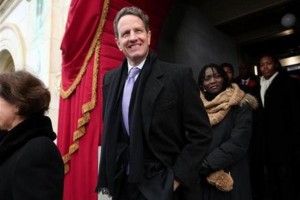 Geithner, who stepped down as U.S. Treasury secretary in January, will join the New York-based firm in March.

Geithner will work closely with Warburg Pincus’ top executives on overall firm strategy and management, investing and portfolio management, organizational and funding structure, and investor relations, the firm said in a statement.

As a part of President Barack Obama’s economic team, Geithner is credited with helping to calm the financial storm that put banks at risk and cratered the housing market early in Obama’s first term.

Geithner was less successful in his push for tax reforms, such as eliminating what the Obama administration has called the “carried interest” loophole. That measure, if passed, would have effectively increased taxes on the slice of investment profits private equity firms such as Warburg Pincus pay on profits from investment deals.

Before becoming Treasury secretary, Geithner was president and chief executive of the Federal Reserve Bank of New York from 2003 to 2009, where he helped design the U.S. response to the financial crisis of 2008-2009.

Since leaving Treasury, Geithner has been a distinguished fellow at the Council on Foreign Relations and has

conducted a series of seminars on financial crises at universities across the country.

Geithner said in statement Warburg appealed to him because of its global strategy and ethical reputation.

His move follows a stream of high-level government officials joining private equity firms. Among the latest was David Petraeus, retired four-star general and former director of the Central Intelligence Agency, who joined Kohlberg Kravis Roberts & Co in May.

(Reporting by Lisa Shumaker and Julie Steenhuysen in Chicago; Editing by Mohammad Zargham and Jackie Frank).