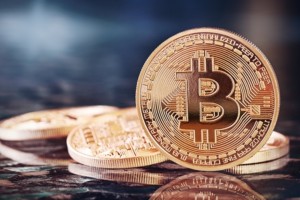 My first experience buying something with bitcoin involved someone buying me a drink, which seemed doubly perfect since I’m a journalist and drinks are always welcome and I’m generally short on funds (of any make or model).

I was at the Bitcoin Center NYC Monday, a large, sparse room filled with screens and wires, metal chairs and a sad-looking makeshift bar – just steps away from the New York Stock Exchange. The center had invited outsiders, including media, to check out a symbolic bitcoin trading session. I went because bitcoin is exciting, even with its price currently spiraling downward. I wanted to learn more, and maybe more importantly, meet the people who work with and use bitcoin every day.

The drink came from a veteran commodities trader, formerly of the “Great New York Cotton Exchange,” Mark Anthony, who wanted to show me exactly how a bitcoin transaction worked.

Technically, Anthony wasn’t buying me a drink; he was tipping the bartender, Mira, who is 26. (I asked Mira’s last name but she gave me a funny look.) Mira has been using bitcoin since last year when friends introduced her. “My vision was that this was a revolutionary thing,” Mira explained, her lip ring glinting.

Anthony tipped Mira the equivalent of about $5 using the digital wallet on his phone to transfer funds. Transaction confirmation took about 10 minutes.

During that time, Anthony explained he was still learning about the technology, but he basically dove in, spent a small amount on his first investment in bitcoin and downloaded his first wallet. Now he tips bartenders with bitcoin.

Anthony represented one of the simpler conversations I had Monday night at Bitcoin Center NYC, where the crowd was a mix of true believers, young techies and other interesting looking Millennials. Like Jon Kirsh, 21, a Bitcoin Center volunteer and student at NYU who fought for and convinced his fraternity, Phi Kappa Sigma, to accept bitcoin.

“There were some huge objections at first,” he said. “This year I’ll be paying my dues in bitcoin.”

And John, 19, from Florida, who declined to give his last name. John quit his job as a line cook after investing about $3,000 he had saved up in bitcoin. He moved to New York, got an apartment in Brooklyn and hopes the price of bitcoin starts heading the right way.

“It will go back up,” he said, adding: “It needs regulation.”

Bitcoin Center NYC was founded by Nick Spanos, who has a long history in real estate. Spanos is the broker of record at Bapple, a real estate agency in Soho. He’s also been involved in Internet startups, philanthropy, worked as general manager of Webster Hall and spent time as a commercial fisherman.
The organization launched on New Year’s Eve and brought in Texas Congressman Steve Stockman to help with the launch.

Bitcoin Center NYC has two deputy directors, two other paid staffers and 20 unpaid interns, as well as volunteers. As far as the trading pit goes, the center is not an official exchange. It doesn’t collect fees (though it does have a 10 year lease on the space). The trades take place between private individuals, who can then, if they choose, have the Bitcoin Center crew display the trade on a big screen. There’s even a guy who shouts out the trades just like an open outcry trading floor.

The center also acts as a sort of incubator. Andrew Martin, 18, is chief operating officer of a startup called MiningBot developing digital currency mining machines at the center. On Monday night, one of the machines was mining for Mazacoin, a digital currency developed by the Oglala Lakota Nation.

The mood Monday wasn’t dampened by the recent downward spiral of the price of bitcoin, which has fallen steadily since large bitcoin exchange Mt. Gox filed for bankruptcy after allegedly losing some $400 million worth of customers’ bitcoin in what the company described as a hacker attack. Bitcoin was priced at around $438 Wednesday.

Most of the people I spoke with, including Austin Alexander, one of the center’s deputy directors, said even if bitcoin failed, the technology behind is not going away. The media focuses on bitcoin as if that is the important point, but it’s idea of decentralized consensus that is the real story, he said.

Bitcoin Center NYC is an interesting place, and I would recommend a visit, even if you don’t know the different between a bitcoin and a gold coin. There’s a lot of energy, a lot of hope – a lot of looking into the future, a raw sense of exploration. It’s a place I’d like to visit again, if only to try my hand at tipping a bartender with bitcoin.