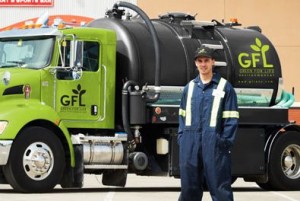 GFL Environmental Inc has closed its previously announced acquisition of Matrec Services Inc, the solid waste unit of TransForce Inc (TSX: TFI), for $800 million. GFL said the deal creates a major Canadian environmental services company valued at about $2.4 billion, and will facilitate the company’s entry into the Québec market and Eastern Ontario. The acquisition was funded in part by $458 million in equity from Macquarie Infrastructure and Real Assets and an investor group led by Highbridge Principal Strategies, an existing GFL backer. Funding was also provided by a US$300 million private offering of senior unsecured notes. GFL is also backed by Hawthorn Equity Partners.

TORONTO, Feb. 1, 2016 /CNW/ – GFL Environmental Inc. (“GFL”) announced today that it has completed the acquisition of the Matrec solid waste division from TransForce Inc. (“TransForce”) (TSX: TFI), which was announced on October 29, 2015, for CAD$800 million. The acquisition will facilitate GFL’s entry into the Quebec market and Eastern Ontario.

The acquisition was funded in part by the private offering of US$300 million in aggregate principal amount of senior unsecured notes due 2021 (the “Notes”), bearing interest at 9.875% per annum, which also closed today. The Notes were issued through GFL’s wholly owned subsidiary, GFL Escrow Corporation (“GFL Escrow”). Substantially concurrently with the closing of the Matrec acquisition, GFL Escrow amalgamated with GFL and the successor by amalgamation has assumed the obligations under the Notes by operation of law.

Following completion of the Matrec acquisition and the Macquarie and HPS Investor Group investments, GFL’s total enterprise value, is approximately $2.4 billion, making GFL one of the largest environmental services companies in Canada.

“This transaction solidifies GFL’s position as a leader in the Canadian environmental services industry by expanding our solid waste operations into Quebec and Eastern Ontario,” said Patrick Dovigi, GFL’s Founder and CEO. “Matrec is led by an experienced management team including Dave Richmond who has over 25 years of industry experience and we are thrilled to have Dave and all of the Matrec employees join the GFL team. We are pleased that Highbridge and their co-investors continue to support GFL and are excited to welcome our new partner, MIP III whose extensive experience in the solid waste industry will bolster our management team in continuing to execute on the Company’s strategic business plan.”

Karl Kuchel, Chief Operating Officer of Macquarie Infrastructure Partners said, “We are very impressed with what GFL and its management team have accomplished since its inception. We look forward to partnering with GFL to support the Company’s continued growth in the years ahead.”

Scot French, Partner, Highbridge Principal Strategies, said, “Today’s announcements are integral components of the Company’s strategic business plan and will help further position GFL for long-term success. We are excited to have Macquarie join the shareholder group and look forward to our ongoing partnership with Patrick and his entire management team as they continue to execute against their unique growth strategy.”

GFL, headquartered in Toronto, ON, is a Canadian diversified environmental services company offering services in solid waste management, liquid waste management and soil remediation. Through its national platform of Canadian operations, with the Matrec acquisition, GFL serves approximately 39,000 commercial, industrial and institutional customers, more than 1.7 million households under municipal collection contracts and has a workforce of more than 2,700 employees.

This news release may contain forward-looking information including but not limited to the potential for an offering and issuance of Notes by GFL and the use of proceeds therefrom. Such forward-looking information is based on certain assumptions and analysis made by GFL in light of its experience and perception of current conditions and expected future developments as well as other factors it believes are appropriate in the circumstances. However, whether actual results, performance or achievements will conform to GFL’s expectations and predictions is subject to market conditions and a number of known and unknown risks and uncertainties which could cause actual results to differ materially from GFL’s expectations. Other factors which could materially affect such forward-looking information are described in the risk factors detailed in the offering documentation prepared and delivered by GFL in connection with the Notes Offering.