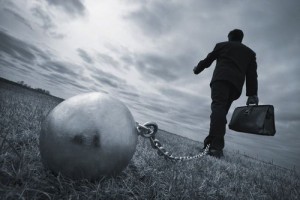 The 50 percent is above the market norm. Most large LBOs these days typically call for about 28 to 30 percent equity.

Blackstone and Goldman struck a deal in April to acquire the New York-based provider of market data technology from its prior sponsor, Kohlberg Kravis Roberts & Co. The buyers are splitting the $487 million equity investment for Ipreo (which includes about $65 million of management rollover) that gives them 86 percent of the company, Moody’s Investors Service said. Each firm is putting in about 25 percent, which is more in line with market conditions, said Gregory Fraser, a Moody’s VP and senior analyst.

Still, 50 percent is one big equity check. One PE executive, who had not seen Ipreo’s financials, said the large equity cushion was likely to make sure the company would have plenty of capital available for growth and acquisitions. A banker added that larger equity positions could facilitate future growth. “More PE firms should follow that model as opposed to putting on too much debt and hoping for the best,” the PE exec said. “This really limits their ability to grow.”

But a second PE executive disagreed with such altruistic goals. Instead, this person said, it’s all about the money and the debt. Ipreo was sold for a big purchase price that required Blackstone and Goldman to provide more equity, the second PE source said. The company also is loaded with debt. Ipreo’s total debt to EBITDA ratio jumped to 8.8x with the sale to Goldman and Blackstone from 4.4x in March, Moody’s said. “Someone paid a huge price to buy [Ipreo] if they have that much leverage and 50 percent equity,” the second source said.

The sponsors likely didn’t want to risk adding more leverage to Ipreo, Fraser said. Moody’s assigned a “B2” corporate family rating to Ipreo when it was owned by KKR. That dropped to “B3” once it was sold to Goldman and Blackstone, Fraser said. “B” ratings are considered speculative and are subject to high credit risk, Moody’s said. B2 is more speculative than B1, while B3 is the most speculative.

The sponsors could have added more debt to Ipreo, Fraser said. However, this likely would have caused Moody’s to lower Ipreo’s rating down to CAA, which is considered high risk. CAA is reserved for companies that are at a higher risk to default within a year or so, Fraser said. “It’s very hard to sell that to investors,”  he said. “It’s very hard to place CAA paper.”

Fraser also noted that Goldman or Blackstone each could have done the deal by themselves. But they chose to team up to limit their equity exposure, he said.

A Blackstone spokesman said Ipreo’s current leverage “is appropriate for the asset.”

Ipreo isn’t the only deal where a sponsor is investing lots of equity. In June, KKR announced it was buying Internet Brands, an internet media company, from Hellman & Friedman in a deal valued at $1.125 billion. KKR is putting up $554 million equity (which include $40 million of management rollover), or nearly 50 percent, Moody’s said.

Just as with Ipreo, KKR could have added more debt to Internet Brands and reduced its equity contribution. But that would cause an even lower rating for Internet Brands, Fraser said.

“Private equity sponsors are willing to increase the debt on acquired companies at this stage of the credit cycle, because they believe they can still get a reasonable return on their investment over the next four years through a strategic sale or IPO. However, it may take longer if the markets sour,” Fraser said.

Executives at Goldman, KKR, Ipreo and Internet Brands could not be reached for comment.