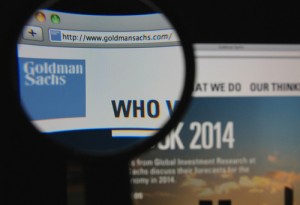 Analysts had expected earnings of $4.32 per share, according to Thomson Reuters I/B/E/S.

Investment banking revenue fell 16 percent to $1.44 billion, while revenue in the bank’s division that trades bonds, currencies and commodities – a traditional strength for Goldman – fell 29 percent to $1.22 billion.

Excluding gains related to repayment of debt and the sale of a majority stake in the firm’s European insurance business in 2013, revenue in that division fell 19 percent.
“Looking ahead, we see evidence of a continued pick up in momentum for the global economy that will improve the opportunity set for 2015,” Chief Executive Lloyd Blankfein said in a statement.

Goldman Sachs shares were down 1.5 percent in premarket trading on Friday.

Fixed income trading has come under pressure in recent quarters due to weak client trading volumes and stricter capital rules in the aftermath of the financial crisis.
A surprising burst of volatility in December exacerbated the problem by discouraging many investors from taking positions.

Barclays analysts had expected Goldman to report a 13 percent decline in revenue from its fixed income, currencies and commodities (FICC) trading business.

Of the big U.S. banks reporting this week, only Wells Fargo & Co managed a rise in profit, largely because it is more focused on retail and commercial banking.

Revenue in Goldman’s investing and lending division, which puts the bank’s own capital to work by investing in companies and lending to them, fell 26 percent to $1.53 billion.

Goldman used 36.8 percent of its revenue for compensation last year, slightly down from 2013. Many analysts had expected the compensation ratio to be flat to slightly lower as the bank tried to make up for weak revenue.