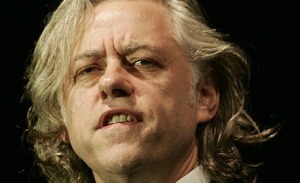 Berlin (Reuters) – Sporting what he joked was his “Gordon Gekko” shirt, Irish rock star Bob Geldof cut an unlikely private equity figure on Wednesday as he exalted the industry’s virtues and urged top financiers in their annual gathering to invest in Africa.

Speaking for an hour without notes at the SuperReturn International conference in Berlin, Geldof made an impassioned address peppered with expletives designed to tug on heartstrings but also appeal to private equity’s profit-making instincts.

“You must go and kick the tires. You are the guys who go where capital needs to go. Capital will only go where it is sent,” Geldof said, stretching out his arms as if to reach his audience of private equity executives.

“Do we leave this vast continent, with all the resources we will ever need, do we leave it to China? Eight miles from Europe, do we just leave it to them?” he asked, referring to the distance across the Strait of Gibraltar separating Spain and Morocco.

Geldof first became famous as the frontman of Irish punk rock group The Boomtown Rats, but his work on Africa has overshadowed his early rock career, with his name forever tied to the Band Aid single and Live Aid concerts that raised millions of dollars for African aid.

He is now the chairman of an Africa-focused private equity fund which said earlier this month it had raised $200 million from investors, close to half its targeted size of $450 million.

Dubbed 8 Miles, the fund plans to invest in companies that can develop into “African champions” in sectors such as agribusiness, telecoms and consumer goods.

“We put together our little thing – a goldilocks thing, not too small, not too big, just right. And we will make a lot of money, a lot. For me I want to leave behind me firms, farms, factories. Fuck the money, that’s me,” Geldof said

The fund is promising investors an internal rate of return of over 25 percent after a year in which the S&P 500 U.S. stock index was flat and investors are hungry for yields they cannot find in listed equities and bonds.

“He is so right, Africa has great potential, and he was really good in his presentation,” said Wael O. Bayazid, a managing director with private equity firm Carlyle Group LP, which is raising a sub-Saharan African fund.

Private equity is often criticized for saddling companies with debt only to sell assets, shed jobs and take out profits — an image which has not helped the U.S. Presidential candidacy of Mitt Romney, a former private equity executive.

“I have learned that private equity, contrary to the Romney-esque debate in the United States at the moment, can be a major vehicle for positive change in this world,” Geldof said.

Geldof referenced the big payday of some of private equity’s titans, including Henry Kravis and George Roberts, who got $94 million each in 2011 from buyout firm KKR & Co LP , in also making a wider case for philanthropy.

“You have got the four houses, the three jets, the 10 cars, the 65th f**king Picasso. What’s the point? So its stuff, and right now it’s the stuff that will get us out of that mess,” Geldof said.