With former Treasury Secretary Timothy Geithner now counted as a participant, the practice of general partners borrowing money to invest in their own private-equity funds is expected to increase, according to players in the space.

Among the dynamics fueling the trend: stricter tax rules on fee waivers, bigger funds, limited partners expecting GPs to commit to their own funds, and junior members of firms who lack the resources to invest on their own.

LPs prefer that GPs have skin in the game as a way to align the interests of managers and investors in a fund’s performance. But taking out loans to do so has received less attention, although the practice has been around for a long time.

Such loans, which are backed by either the GP’s personal assets or the firm’s assets, trigger a disclosure requirement under Uniform Commercial Code rules, a way for each individual state to record the security of a loan, according to a definition by loanback.com.

Now president of Warburg Pincus, Geithner arranged a credit line to borrow an undisclosed amount from J.P. Morgan Chase & Co as part of the overall GP commitment to the $12 billion Warburg Pincus Private Equity XII LP, according to a regulatory filing and a report. Insiders at the firm invested about $800 million in the fund, according to a report.

A spokesman for Warburg Pincus did not respond to a request for comment. 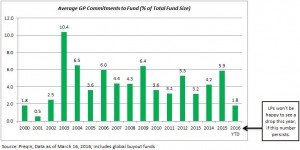 All told, GPs committed an average of 5.9 percent into their own funds in 2015, the most since 2009, according to data from Preqin. The highest percentage came in 2003, when 10.4 percent of fund totals came from GP commitments. (See Chart of the Week).

One fund-of-funds executive who invests in middle-market funds said LPs don’t often know if GPs are borrowing money to meet their fund commitments, but it’s not generally seen as a negative.

“They’ll have to pay that money back and they’re on the hook for it,” the executive said. “I see it as part of managing their cash flow. If it allows them to put more in a fund, then I’m happy they’re doing it.”

Another LP said, “[It’s] not a major issue for me, although you don’t want to see GPs getting over their skis with debt.”

Jeff Eaton, partner and head of origination at Eaton Partners, a placement firm, said more LPs are asking for disclosure on borrowings by GPs to invest in their own funds.

“Most LPs want to see actual exposure to the fund without leverage,” Eaton said. “Cash is always better than leverage.  LPs are reasonable when it comes to a junior principal or less wealthy member of the GP wanting to invest in the fund and are OK with some ability for these people to borrow.”

More private-equity pros may seek loans as the U.S. Internal Revenue Service works to discourage GPs from meeting their fund commitments by waiving their management fees in exchange for a priority profit allocation once the fund starts to earn income. As carried interest, the profits get taxed as long-term capital gains at a rate of 20 percent or less. Regular income is taxed at a rate of as much as 40 percent.

Scott Case, head of Silicon Valley Bank’s private-equity-services business and a provider of loans for GP commitments, said roughly 10 percent of the bank’s clients use them.

“We expect the percentage of funds doing this will go up,” he said. “The activity level has increased dramatically … because of the IRS stand on fee waivers.”

In the sub-$2-billion fund universe where Silicon Valley Bank focuses, LPs typically expect 4 percent to 5 percent of a fund to come from the GP, up from 1 percent to 2 percent years ago, he said. GPs typically aren’t required to disclose borrowed money amounts in their fund commitments.

“GPs have been doing this because in part they’re betting on themselves and also to increase alignment and be responsive to the LP community,” Case said.

The loans break down to an even mix between management companies that guarantee the loan and individuals who take out loans on their own. Generally, individuals fund half their commitments themselves and borrow the other half, he said.

Other lenders in the space include Investec, UBS, Bank of America and Credit Suisse.

At San Francisco-based HGGC, the firm’s employees invested 8 percent, or more than $200 million, across its two funds totaling $2.4 billion in commitments, according to a source.

Keith Palzer, director in Navigant’s financial-services practice, said the loans by Warburg’s Geithner follow a tradition of borrowing by junior members of firms.

“It makes sense because he’s coming from government and he (probably) doesn’t have the wealth that a normal PE executive at his level would have,” he said. “He did what any person starting out in PE would do.”

“The borrowing is a byproduct of the industry getting more mature and more institutionalized,” Palzer said. “It’s not a requirement, but the expectation of the LPs is that the management firm will put money in there.”

A protester holds a sign reading “Give Us Our $$$$$ Back” as US Treasury Secretary Timothy Geithner (L) speaks during a hearing of the Congressional Oversight Panel of the Troubled Asset Relief Program on Capitol Hill in Washington, April 21, 2009. REUTERS/Jonathan Ernst