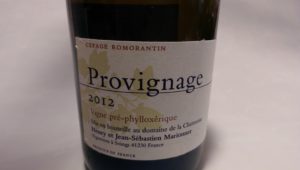 W Capital Partners, one of some 45 private equity firms to host a table at ACG New York’s packed wine-tasting event Monday evening in New York City, raised the bar on promotional acuity in its selection of bottles to serve. The wines echo the kind of investing it does.

The buyer of minority interests in buyout and venture-backed companies—a strategy sometimes referred to as secondary directs—offered up bottles of French wines Provignage and Côteaux De Tupin.

Provignage suggested the older assets ripe (or overripe) for sale that are sought by W Capital. It is made from grapes grown on vines planted around 1850, among the oldest to still produce fruit, according to the firm. Côteaux De Tupin, meantime, illustrated the firm’s appetite for non-core assets. The wine is made from the nearly extinct Sérine grape, a variety that lost popularity after World War II due to low yields and its resistance to easy cultivation, the firm said.

PeHUB caught up this week with David Wachter, managing director of New York-based W Capital, for five quick questions about wine, the firm’s $750 million fund, and its latest deals:

So, who selected the wine for your table?  The credit goes to our vice president and resident sommelier Simon Harris. Simon is a really fascinating guy. He grew up in the UK, and also in Africa. His father was a diplomat. So he’s incredibly worldly and talented at a bunch of things. He curated our wines, and he was the perfect person to host our booth.

You’ve invested about a third of your third fund, which closed at $750 million just over a year ago, in 11 deals. What kinds of transactions have you been doing?  They fall into three categories. We’re doing deals where we’re providing liquidity to a number of shareholders at the same time that we’re supporting the companies they backed with a primary growth equity investment. These are mainly late-stage venture capital or growth-equity type investments in businesses in high-growth markets like financial technology, technology-enabled services, consumer, media, and cyber-security. Second, on the buyout side of the market, we’re buying minority positions in companies from an original sponsor looking for partial liquidity and perhaps to reduce risk in winners but also wanting to stay involved in the business. We call that a partial sell-down. And third, we’re buying assets from funds that are longer in life and where the sponsor is selling down positions. Sometimes this is to clean up and liquidate the remaining portfolio. Sometimes, for younger funds, it is part of portfolio management. Sponsors may want to generate cash realizations for recycling capital back into a fund that is close to fully drawn. Our in-bound deal flow breaks down roughly equally among the three main kinds of deals we do. Our close rate on portfolio sales is the lowest, but when we do close them we get more assets.

What’s going on in the market that has more sellers looking to do partial sales? On the growth equity deals, it’s logical for shareholders to do partial exits because the industry has run up to higher pricing levels. Sponsors have made enough money that de-risking is an objective for them on a partial or full exit. Our providing money not just for liquidity but to finance additional growth creates alignment between us and the rest of the board and with management.

Tell us about a couple of your recent deals:  I’ll tell you about two companies in which we invested about $20 million each. Inspirato with American Express is a membership club for premium vacation properties. The early and lead investors are venture firms Kleiner Perkins Caufield & Byers and IVP. We invested in their latest funding round during the third quarter. Many membership club models out there are asset heavy in which the membership club buys the properties. This company has an asset-light model where they sign long-term leases with vacation properties. They offer huge savings and service benefits to customers, who are charged an initial fee, annual dues and usage charges across the portfolio of properties. The membership base is growing significantly and the retention rate is very high. Once members sign up, they stay with it.

On the more consumer side of the market we invested late last year in Moosejaw, an online retailer of outdoor apparel and outdoor sporting goods with a very loyal shopping and affinity base. There were two private equity firms that each owned less than 50 percent of the company. One of them wanted to exit and the other one didn’t. So it was the perfect situation for us. The one that wanted to stay in the deal was looking for a partner with similar hold period expectations, and the resources to be able to buy the selling shareholder position and then be actively involved as a board member and take a collaborative partner-type view. It’s in a nice growth mode now. We’re giving the company support to reinvest in growth and to grow for several more years.