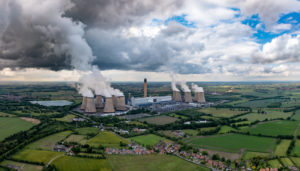 Grey Rock Investment Partners, a Dallas-based private equity firm investing in the so-called energy value chain (such as industrial electrification, power optimization and natural resources) recently invested $150 million in Vault 44.01, a US and Canada-based company working on Carbon Capture and Sequestration (CCS). PE Hub caught up with Matt Miller, Grey Rock co-founder and managing director, to learn more about the firm’s appetite for decarbonizing the planet.

The CCS process involves the injection of carbon dioxide into underground, where it is permanently trapped or transformed. There are currently 29 CCS facilities in operation around the world, capturing and storing 40 million tons of CO2 per year, according to a June 2022 report from the Global CCS Institute. For the sake of comparison, that’s about the amount of annual energy-related emissions for countries the size of Denmark, Ireland or New Zealand, for example.

“We are enjoying the first mover advantage,” Miller said. “I think we are going to see a significant increase and investment in the carbon capture arena in the coming years, especially throughout the US.”

Miller said one of Grey Rock’s goals with Vault 44.01 is to “make economic returns that are competitive with traditional private equity returns.” In the US, he pointed out that there is a tax credit for CCS.

Miller said the Vault 44.01 management team has decades-long CCS expertise, which inspired confidence in Grey Rock when making the investment.

“Our goal is to is to allow the Vault team to blossom and to continue developing business with the emitter and getting permits from the EPA reviewed and approved.”

Miller said that, while the focus is on the US and Canada for now, there is also capacity to also scale CCS to other countries. “The great news is that geology exists all over the globe.”

CCS technology can work well to provide new opportunities for people working within traditional energy, among them geologists whose skills are similar in both fields, Miller said. Providing opportunities and economically aligning workers from the fossil fuels space into renewable energy is a movement known as “Just Transition.”

To develop robust business models for CCS, Miller said PE firms should ensure that emitters are also brought to the table.

“We need to work with emitters and not against them,” he said. “I think that can be a more constructive conversation. I think private equity can be a bridge to allow emitters to have a seat at the table and to be candidly part of the solution. I think it’s probably the lowest-hanging fruit out there.”