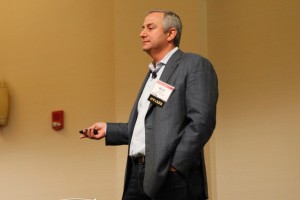 The venture firm formerly known as GRP Partners has a lot of news to announce. As of Thursday, the Los Angeles-based firm is changing its name to Upfront Ventures. Partners are also moving into new digs in Santa Monica next year. Oh, and they just closed on $200 million for a new fund.

“We’re the same partners with the same strategy. It’s just that we have evolved over time and we realized the market has changed,” says Partner Mark Suster. He said the new name was part of broader “brand refresh” aimed at bolstering the firm’s online presence and name recognition among entrepreneurs.

Suster says the $200 million fund size was in line with what partners had targeted, though it did take longer than expected to close. The firm previously raised $160 million for its most recent fund, GRP IV, which closed in 2011, according to Thomson Reuters (publisher of peHUB).

The new fund will make early stage investments in technology, big data and digital media, with a concentration in Southern California. Upfront will also focus on Series A and B stage companies, an area that Suster, in a presentation accompanying the fund closing announcement, identified as currently under-capitalized.

Suster, one of the venture industry’s more prolific bloggers, maintains that there’s good reason to be bullish about venture as an asset class these days. While overall venture returns have underwhelmed in the years following the bursting of the dot-com bubble, things are a lot different today, and that bodes well for future performance, he says.

For one, Suster notes, there’s a lot less capital going into the venture industry, with U.S. VCs last year raising about $16 billion — a fraction of their bubble-era peak. At the same time, adoption of Internet and mobile technologies is exploding at an unprecedented pace, with close to 140 million smartphone users and 100 million tablet users nationwide, and more than 1 billion active users worldwide visiting Facebook each month. Upfront also sees opportunity for investing in technological disruption in industries ranging from education to healthcare to defense, Suster says.

The new fund will invest in companies across the country, but it will zero in on the Los Angeles region. That’s the same strategy the firm has pursued in recent months. While partners have backed companies in multiple states, much of their activity has concentrated near the firm’s headquarters, including investments in such Southern California companies as ZestCash, a provider of credit analysis tools; Adly, which delivers celebrity-sponsored marketing services; and Health Data Vision, which develops a healthcare analytics platform. Suster says he’s never seen the Los Angeles startup scene looking more vibrant.

The decision to take on a new name shouldn’t come as a surprise for those who’ve followed GRP for a while. The firm has been through a lot of changes in its 17-year-history. Previously, GRP was well known as an investor in the retail space, investing in big box and chain retailers, including Costco, Office Depot and Starbucks. Other prominent exits include payment application BillMeLater, sponsored-search provider Overture and e-commerce payment security provider CyberSource.