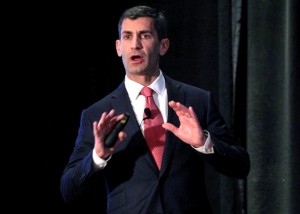 GTCR is talking to its limited partners about holding companies longer to reduce execution risk and drive returns, since low interest rates are expected to persist, according to a key executive at the Chicago firm.

One path under study involves taking a page from the real estate sector, with funds holding core investments that generate solid returns with lower risk, and then adding in riskier assets on the edges to drive alpha.

Holding successful companies for a shorter time may drive internal rate of return, but LPs with longer time horizons may want to focus more on growing their initial investments in funds for an extended time, he said.

“Is it better to get strong IRR in a short period or a multiple of invested capital over a longer period? That’s being discussed in investment committees,” Bondy said. “Private equity may bifurcate by placing a handful of anchor investments into a fund longer … and then take shots around the side with other investments. That’s absolutely a possibility.”

Asked whether GTCR might launch an evergreen-type fund, Bondy said it has no immediate plans to do so. Bondy noted that some larger buyout firms have been rolling out some longer-life funds.

Currently, GTCR is investing its most recent flagship fund, GTCR Fund XI, which closed on about $3.9 billion in January 2014. That fund is about 40 to 45 percent invested, he said.

But Bondy said GTCR has concluded that the low-interest-rate environment will continue and that PE is drawing more interest from LPs seeking to drive returns for pension funds.

“LPs have gone out a little further on the risk continuum to generate the returns they need,” Bondy said. “LPs’ maniacal focus on IRR may shift and [multiple on invested capital] could become a more important benchmark.”

Meanwhile, family offices and sovereign-wealth funds have been more active in purchasing their own companies, with plans to hold them for decades. This has taken off the market a number of strong companies that GPs might otherwise bid for and buy for their portfolios, he said.

Bondy said GTCR didn’t think the low-rate environment would persist as long as it has following the global financial crisis of 2008.

“We should have been a little more aggressive,” he said. “We didn’t lean in enough when there was dislocation in the market.”

Bondy spoke in a keynote address to the Buyouts PartnerConnect Midwest 2016 conference at the Westin Hotel in Chicago.