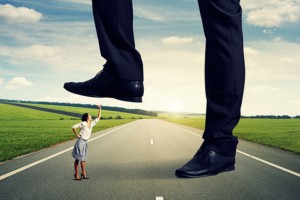 Oh lord, so this explains it.

Women have heard a million excuses about why, as entrepreneurs, we get the short end of the stick when it comes to raising venture capital. In case you are unaware or are missing a second X chromosome, you should know that “among high-growth-potential ventures, only 11 percent of U.S. firms with venture-capital backing, past and present, have been founded or led by women, and women-led ventures have received only 7 percent of all venture funds.” Considering that about 51 percent of the U.S. population is women and that there are loads of studies that demonstrate better financial returns from businesses run by women, this trend persists year after year.

Why? Why do men get all the funding?

We have been told it is because it’s an “old boys club” and thus women are out of sight, out of mind.

We have been told there are so few female CEOs there are no opportunities to fund them.

We have been told experience is key to successful leadership and women have less experience leading companies than men.

We have heard it is because women have babies and thus aren’t to be trusted as committed CEOs. (Note to readers: women are largely unable to have babies without men involved).

We have heard it is because women are too self-effacing and present ourselves too self-consciously to be thought of as great leaders.

But a recent study published in the Proceedings of the National Academy of Science demonstrated pretty effectively the main reason women come out badly on the venture capital funding front is –wait for it–they are not good-looking men. Put another way, venture capitalists, who are overwhelmingly male, would rather fund a handsome guy than any woman, regardless of the female entrepreneur’s attractiveness quotient. In case it makes you feel any better, ugly men fared about as well as women. FYI, that does not make me feel any better.

To put an even finer point on it, it seems that the pursuit of venture capital funding has become a game of Hot or Not, or perhaps its more modern equivalent, Tinder, and females need not apply.

This research finding suggests “leaning in” will not solve female entrepreneurs’ funding challenges unless they lean into a sex change operation that leaves them looking like George Clooney.

The study itself (which unfortunately requires a fee to view fully, but is nicely summarized HERE) demonstrated after multiple tests, including having both men and women pitch the same deal to the usual suspects, the researchers, who come from Harvard, UPenn/Wharton, and MIT/Sloan, came to this conclusion:

The researchers specifically found when identical business-plan videos were narrated by either male or female voices, respondents chose the plans narrated by men 68 percent of the time. Also, “in pitch competitions, male entrepreneurs are 60 percent more likely than women to succeed, other things being equal. The study found gender explains 42 percent of this variance. Meanwhile, physical attractiveness, as rated by those viewing pitches, produces a 36 percent increase in pitch success.”

As I sit here on the couch tonight watching my favorite show, I realize there is an obvious solution to this problem. When VCs hear pitches or judge pitch competitions, they should do it in the manner of The Voice. In other words, VCs should listen to these pitches with their back turned towards the entrepreneur and, to add another level-setting artifice, with voice alteration technology applied to de-genderize the talk track. I would love to see a study that tries this—that actually takes the obvious gender and hotness cues out of the way and lets the deals and founders stand on their own. Who knows? Maybe some of the VCs might find they like women after all.

Lisa Suennen is managing partner at Venture Valkyrie Consulting, which provides services to companies, organizations and private equity firms in the healthcare field. Additionally, Suennen is a senior advisor to Psilos Group, a healthcare-focused venture capital and growth equity firm.