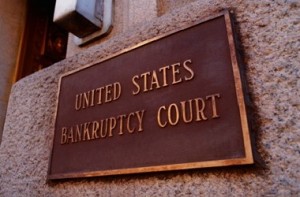 This is Sarah, filling in for Chris. Hope everyone had a great weekend.

The New York area welcomed beautiful weather over the weekend. I enjoyed a much needed break from my apartment at a park nearby, where people respected social-distance rules as the police force monitored crowds by horseback – another first for Greenpoint, Brooklyn. People-watching seemed more entertaining than usual, but maybe it’s just seeing people that felt unusual. Regardless, a little sunshine goes a long way.

Bankrupt: We now have the first major retail bankruptcy since the coronavirus roiled US markets and shuttered the doors of businesses countrywide. J. Crew Group, which operates brands including J. Crew and Madewell, plans to convert its $1.65 billion debt pile into equity.

The company’s existing lender base – Anchorage Capital Group, Blackstone Group’s, GSO Capital Partners and Davidson Kempner Capital Management – are poised to take control of J. Crew as part of Chapter 11 proceedings. The lenders have committed to inject $400 million in the company as part of its reorganization.

J. Crew was taken private in 2011 by TPG and Leonard Green & Partners in a roughly $3 billion leveraged buyout, and their investments are now expected to be wiped out, Reuters reported.

“Raising a sizable amount of permanent capital eliminates liquidity issues for private equity firms,” Rees said. “As much of this capital remains on balance sheets, firms are now positioned to play offense and move on an opportunity that is timely.”

GP stakes funds, which acquire minority interests in firms in exchange for a share of income, emerged strongly in the past few years, amassing ever-larger dedicated pools. In December, Private Equity International estimated the top three funds – Dyal, Blackstone’s Strategic Capital Holdings and Goldman Sachs’ Petershill unit – had accumulated nearly $24 billion.
Resources of this type and magnitude were not available to PE firms during the last downturn.

If time-sensitive opportunities require more money than is available, Rees said, PE firms can request advances on forthcoming capital installments. In addition, they can tap into Dyal’s $1 billion-plus long-dated credit offering, which supports many of the same goals as stakes investment, including opportunistic initiatives.

Top Scoops
Bracing for the long haul: The traditional M&A engine will take several months to rev back up for private equity investors, with the first wave of new dealflow likely centered around investing into challenged and distressed opportunities, bankers and lenders recently told me.

“The prospects of the new deal landscape in two to three months, I think, is grim,” said David Brackett, CEO of Antares Capital. “I think, realistically, new deals you’re talking at least six months out. It’s going to be October before you get a sense of the overall impact of the pandemic on the economy and middle-market companies.”

Considering the likelihood of extending quarantine periods and the potential for some version of a resurgence of coronavirus cases this fall, that “starts to question the likelihood we’re going to get a quick snap-back here,” added Richard Harding, a managing director at Moelis.

If you ask Bill Sanders, global head of financial sponsors at Morgan Stanley, 100 percent of firms right now are saying, “I want to be solution-oriented” or “I want to give you rescue capital.” But, he cautioned, “who’s actually going to do that? It’s too early to know.”

If you look back at how many PIPEs or rescue deals got done after the global financial crisis, for instance, not nearly as many as were talked about, he said. Read my full story.

Life under quarantine: Working from home comes with its own set of challenges, but Adam Shebitz of Palladium Equity Partners is making the most of the break from the office and encouraging his colleagues to do the same, writes Karishma Vanjani on PE Hub.

Other than successful DIY haircuts, Shebitz also sees more silver linings coming out of the pandemic. Among those, sponsors are having more dialogue amongst themselves, versus pre-crisis, when Shebitz spent more time engaging with investment bankers. Read more.

That’s it for today. As always, get in touch with any tips, feedback or just to say hello. Find me on LinkedIn or reach me at springle@buyoutsinsider.com.