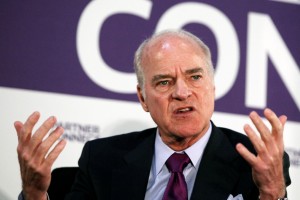 Much of Kohlberg Kravis Roberts & Co’s second quarter earnings call Thursday was like a pleasant summer stroll through the blossoming garden of its earnings, which have more than tripled year-on-year.

There was one moment, however, which everyone was anticipating, that soured the mood a bit. One analyst (I didn’t catch his name) brought up what must be a squishy topic around the water cooler over at KKR HQ—KKR Capstone: affiliate or … something else.

The analyst wanted to get clarification on KKR’s relationship with KKR Capstone and how the consultant group’s executives are compensated. The issue arose in May after a critical investigation in the Wall Street Journal revealed mixed public messages by KKR and its portfolio companies about the firm’s relationship to the group, which works with KKR portfolio companies to improve operations.

KKR does not share the fees KKR Capstone collects with its limited partners, which, under an affiliate relationship, would be a no-no, under the terms of the 2006 fund, according to the WSJ.

KKR Capstone is not an affiliate of the firm, Scott Nuttall, KKR’s head of global capital and asset management group, said during the call. “KKR owns no equity in Capstone, it’s not an affiliate,” he said. “We’ve been open about that with investors from the get-go. It’s actually in our limited partner agreements. We don’t think people we work for have any confusion on the topic.”

Capstone executives, who are employed by KKR Capstone and not KKR, are able to share in the carried interest pool at the firm, though the portion allotted to Capstone executives comes from “KKR economics and not from fund economic s,” said Bill Janetschek, KKR’s chief financial officer, on the call.

There are several ties between KKR and the consulting group despite the non-affiliate status. KKR could provide loans to KKR Capstone with below-market rates and no stated payment schedule, the filing said. The firm may also provide administrative services, below-market rent and access to KKR Capstone to participate in the firm’s insurance policies and benefit plans, the filing said.