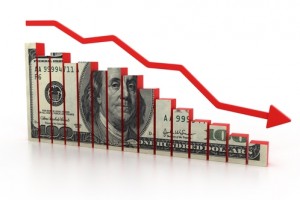 (Reuters) – KKR & Co LP said Friday that income from its share of investors’ profits and the fees it charges for its assets slumped in the first quarter, prompting the private equity firm to cut its dividend, albeit less than some analysts expected.

On other metrics, such as the value of its portfolio, however, earnings were better than expected, highlighting the challenges investors face in valuing private equity firms as Carlyle Group LP prepares to go public.

“Investors focus increasingly on distributable earnings, because they represent actual cash returned to investors. These were down this quarter but less than we expected,” said Michael Kim, analyst at Sandler O’Neill & Partners.

The company declared a first-quarter distribution of 15 cents per unit compared with 21 cents a year ago. Eight cents of that came from fees, showing the firm’s strong reliance on non-performance based compensation for its profits.

Economic net income (ENI), a measure of the firm’s profitability that takes into account the mark-to-market valuation of its assets, fell 2 percent year-on-year to $727.2 million.

This was despite its private equity portfolio being marked up 9 percent on a buoyant equity market. Taking into account all of its assets, the pace of appreciation in its funds was slower than a year ago, leading to a drop in ENI.

Valuations of private equity portfolios are notoriously difficult to predict. KKR beat analysts’ expectations by posting an after-tax ENI of 99 cents per adjusted unit. The consensus view was for 74 cents.

With the pricing of the initial public offering of peer Carlyle Group LP due on May 2, investors are monitoring the earnings of alternative asset managers closely.

KKR’s earnings on Friday are likely to reinforce a perception that the performance of alternative asset managers is volatile in the short term.

Shareholders often find the financials of alternative asset managers too complex to understand and evaluate.

KKR shares were up 1.8 percent in afternoon trading in a relatively flat stock market in New York.

Fee-related earnings, derived from the various fees charged by KKR’s funds, dropped 42 percent to $73.4 million, while cash from realized carried interest – its cut of investment profits from its funds – was down 39 percent to $44.9 million.

Net income, however, reported on a consolidated basis, was up 19 percent to $190.4 million, thanks to the firm’s big balance sheet, which KKR uses to invest in assets. Earnings from these investments are not shared with fund investors and are used to seed KKR’s new fund offerings rather than pay dividends to shareholders.

Such diversification may make KKR’s earnings more stable in the future as it reduces its reliance on carried interest from private equity funds, which can be cyclical and volatile.

KKR was founded in 1976 by Jerome Kohlberg, Henry Kravis and George Roberts. Kravis and Roberts are joint chief executives. They became widely known through their $25 billion leveraged buyout of RJR Nabisco in 1988, a battle that was immortalized in the 1990 bestseller “Barbarians at the Gate.”