Canadian tech private equity firm Klass Capital has won a bet it made on a decade-long investment in Freshii, a health-food restaurant chain that went public this week.

Freshii closed its initial public offering on the TSX at the upper end of the price range. It raised more than $125 million, a sum that could increase to $144 million if a greenshoe option is exercised.

The IPO is 2017’s first involving a Canadian company backed by a major private investor. And it may herald more to come.

After 2016, one of the slowest years for domestic IPOs on record, the year ahead is expected to see renewed activity featuring several high profile PE and venture-backed companies. The next to take the plunge could be real estate tech platform Real Matters, whose IPO plans are reportedly well-advanced.

About 60 percent of Freshii’s IPO proceeds will go to selling shareholders, including Klass Capital, which invested in 2007.

Klass told PE Hub Canada the Freshii investment had a lot to do with CEO Matthew Corrin, who started the Toronto company in 2005.

“Matthew is one of the best entrepreneurs I’ve ever worked with,” Klass said. “He had a vision for Freshii that took advantage of growing consumer interest in healthy eating. The franchise model was also appealing because it was asset-light and had software-like recurring revenue.” 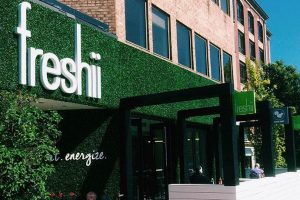 While Freshii today has 244 stores in 15 countries, Klass says “it’s still in the early innings of its growth story.” He said the IPO validated the company’s strategy, which includes expanding system-wide sales from about US$87 million last year to as much as US$365 million by 2019, according to the prospectus.

Klass Capital will keep most of its interest in Freshii and deploy the IPO proceeds to new opportunities.

The launch of Klass Capital

Klass Capital launched shortly after the Freshii deal, beginning as a growth equity investor in enterprise software companies. In 2011, the firm raised a $30 million fund backed by institutional and high-net-worth LPs.

The fund invested in eight companies, including Nulogy, a contract packaging software provider, and TrackTik, a security guard management system. Klass was encouraged by the results, as portfolio revenue expanded five-fold and exits generated “IRRs north of 30 percent.”

From growth equity to acquisitions

He became dissatisfied, however, with minority investing, which gave the firm too little alignment with entrepreneurial owners. When Fund I reached full investment, Klass decided to switch to a fund-less strategy that emphasized control acquisitions.

Under the new strategy, Klass Capital underwrites deals and draws on resources from co-investors, many of them former LPs. It targets one new investment per year, with disbursements of $20 million to $40 million per company.

So far the reinvented Klass Capital has acquired two businesses, both in 2015. They are Docebo, a provider of corporate e-learning solutions, and Resolver, a software platform designed to manage risk and incidents.

Docebo was a small company “with traction” when it was acquired, Klass said. Moving its headquarters from Milan, Italy to Toronto, the business gained more exposure to North America, where it won major accounts. This translated into year-over-year revenue growth of about 90 percent.

Resolver was formed in a union of three companies and is expected to soon add on a fourth. Klass Capital plans to invest in Resolver to take it from “a legacy business to a world-class SaaS platform,” Klass said.

Klass Capital’s long-term goal is to create “a big holding company of incredible software companies” that can be held for an indefinite period, Klass said.

Klass Capital’s team in Toronto consists of six investment pros and talent specialists. It houses a database of 6,500 companies that feeds the firm’s deal pipeline.