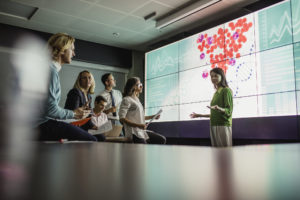 More than a decade into its investment, L Catterton is hashing out a deal to sell PatientPoint, a provider of point-of-care healthcare advertising and education, according to two sources familiar with the matter.

Haymaker Acquisition Corp II, a special purpose acquisition company formed by members of Mistral Equity Partners and other investment partners, is under exclusive discussions to acquire the Cincinnati, Ohio, company, they said.

The $400 million SPAC was formed earlier this year with the intent to acquire and operate a business in the consumer and consumer-related products and services, retail, media and hospitality industries.

If a transaction is reached, it would mark the conclusion of a sales process in which numerous bids were fielded from a broad range of financial and strategic bidders over several months, sources said.

Buyouts initially reported in September 2018 that William Blair had been engaged to advise on a future sales process for PatientPoint, with PJ Solomon retained for additional advice. Sources at the time placed PatientPoint’s run rate Ebitda just north of $45 million.

The exact valuation is unknown, but sources suggested PatientPoint is likely to command a total enterprise value in the $500 million range.

Should the parties reach an agreement, it would mark the second instance in which consumer-focused L Catterton and Haymaker have transacted.

Haymaker I, a $330 million SPAC, completed its merger in March with OneSpaWorld, a unit of L Catterton portfolio company Steiner Leisure. The deal for OneSpaWorld, which owns and operates spas on cruise ships and resorts, commanded a total enterprise value of $850.7 million.

While L Catterton’s investment in PatientPoint dates to 2007, Searchlight Capital Partners and Silver Point Capital in June 2017 joined as investors—injecting an additional $140 million in the company. The Silver Point investment valued PatientPoint at roughly $500 million, Reuters reported at the time.

Led by CEO and co-founder Mike Collette, PatientPoint sells educational content and advertisements in physician offices, exam and waiting rooms. The company gives pharmaceutical and other healthcare companies access to patients at the point-of-care. PatientPoint demonstrates the effectiveness of its advertising campaigns through third-party reports that measure changes in prescription levels in settings utilizing its digital screens.

The idea is also compelling to doctors, in that patients have the chance to be better informed about diseases and treatments while their perceived waiting time also is minimized.

The anticipated deal comes days after PatientPoint competitor Outcome Health agreed to make a $70 million payment to the Justice Department to resolve allegations of fraudulent behavior.

The allegations came just months after a May 2017 funding round from investors including Alphabet’s growth-equity fund, Pritzker Group and Goldman Sachs. The investor group injected nearly $500 million in the Chicago startup formerly known as ContextMedia. The startup reported $5.5 billion valuation in connection with the funding round.