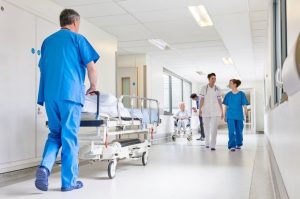 Leonard Green & Partners came under fire from activists at a recent pension fund meeting over its stewardship of portfolio company Prospect Medical Holdings, even as the firm is on the verge of exiting the investment.

Speaking to the Teacher Retirement System of Texas board of trustees on April 17, activists, advocates and community members from Texas and Connecticut urged the $148 billion pension to put pressure on Leonard Green to return “fees and dividends” and pressure Prospect Medical to sign an agreement with local Connecticut activists.

Speaker complaints focused on Prospect Medical’s closing of three facilities in San Antonio, Texas last year and its management of three hospitals in Connecticut that have faced a host of issues.

A Texas-based psychiatric nurse said staff at the three San Antonio facilities were told that only one of them would close, while Connecticut activists said the three hospitals in their area were low-rated by regulatory bodies and had seen several high-profile incidents in recent years. Last year, the Hartford Courant reported on these issues.

“They pledged compassion, professionalism, efficacy, transparency, and we were very happy,” she said. “Unfortunately, we were very disappointed. We have experienced a dramatic decline in health and hospital services.”

McLaughlin said she wanted Prospect to sign an agreement with local activists to provide benefits to the community.

“These are serious allegations,” Texas Teachers board chairman Jarvis Hollingsworth said. “We take them very seriously and investment staff will look into these issues.” Texas Teachers declined to comment further.

Leonard Green acquired Prospect Medical in 2010 in a deal valued at $363 million, sister title PE Hub reported at the time. That included assuming $158 million of the company’s debt. At the time, Prospect owned five hospitals. The company acquired the San Antonio facilities in 2012 and the Connecticut facilities in 2016. It now owns 17 hospitals, according to its website.

PE Hub also reported in 2018 that Leonard Green was trying to sell Prospect, and that the company was valued at $350 million EBITDA. Leonard Green said this story was “reporting on a market rumor that was false.” In 2015, the Wall Street Journal reported another attempted sale that could have valued Prospect at as much as $1 billion. Leonard Green called the story a market rumor.

Leonard Green and some members of management gave the company a $41 million cash infusion in January 2019, according to Moody’s. The firm did not respond to a request for confirmation.

Prospect Medical defended its actions in written responses to emailed questions, explaining that it invested about $56 million in improving the Connecticut facilities. The company said it didn’t feel it was “warranted or appropriate” to sign a community development agreement with activists.

The company also said it closed the three Texas facilities due to a “declining demand for services in a highly competitive market.”

“Many of the claims made by the activist groups are inaccurate or immaterial and are driven by their hostility toward investor-owned hospitals and health systems,” the company said. “They deliberately ignore the many positive contributions our company has made and continues to make in the communities we serve.”

McLaughlin of the Naugatuck Valley Project told Buyouts via email that her organization was made up of 24 different congregations, housing cooperatives and local labor organizations. She said it was appropriate for Prospect to engage with them.

“Our priority is ensuring that our local hospitals provide the quality healthcare that our community needs,” she wrote. “PMH and Leonard Green’s actions have not demonstrated the same commitment.”

She estimated the firm and the company’s other owners had extracted $570 million in “fees and dividends” from the company since acquiring it. She called for the firm and its partners to return that money “to ensure that the hospitals and healthcare workers have as many resources as possible” during the coronavirus pandemic.

Leonard Green told Buyouts the $570 million number, which the Stakeholder Project report estimated based on publicly available information, was “wildly inaccurate.” The firm did not dispute that investors in Prospect were paid dividends of $100 million in 2012 and $457 million in 2018, which were reported by S&P and in a Moody’s statement to local media, respectively, but said those were distributed to all shareholders. The firm said the fee estimates were “incorrect.”

Public documents from 2014 and 2015 said Leonard Green’s stake in Prospect Medical was 61 percent. PE Stakeholder Project also included this number in its report.

The firm told Buyouts that number was “not correct,” saying only that the 61 percent stake from the documents was “obviously not current.”

O’Grady told Buyouts her organization shared its report with the firm weeks ago, but the firm would not engage. An email shared with Buyouts confirmed this.

“If they have different numbers, I would love to see them and I think they should share them,” she said.

“It would be inappropriate for us to disclose private financial information as a corrective to apparent conjecture,” Leonard Green said.

On the way out

As activists voice their concerns about Prospect Medical, Leonard Green is in the final stages of exiting the investment.

“In September 2019, Leonard Green & Partners signed a definitive, binding agreement to sell its stake in Prospect Medical Holdings to the management of the company as part of the normal life cycle of our investments,” the firm’s spokesperson said. “The sale is expected to close upon the receipt of regulatory approval.”

Leonard Green and Prospect Medical both said the company recently retired its outstanding debt, for which the company’s credit was downgraded by Moody’s last year, using money from a $1.55 billion investment by Alabama-based Medical Properties Trust last July.

“We believe we have enabled the company to continue the tough work of turning around troubled safety net hospitals and providing important services to their local communities,” the firm said. A spokesperson added that the Prospect investment was profitable for the firm and its investors.

UPDATE: This story has been updated to include the $41 million cash infusion in January 2019.

CORRECTION: A previous version of this post said Jarvis Hollingsworth was the president of the Texas Teachers board of trustees. He is the chairman. The post has been updated.