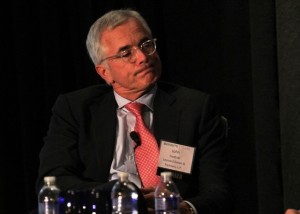 Leonard Green & Co is targeting $7.5 billion for its seventh fund, according to two limited partners who have heard the pitch.

Buyouts exclusively reported in August the firm was preparing to launch Green Equity Investors VII, though at the time the firm had not set a target. Leonard Green closed its sixth fund on $6.25 billion in 2012, which included $250 million from the GP.

“I imagine [the fundraising] is going to go very fast, though it’s a lot of money,” said the first LP. “Their numbers are very good and they have a very broad, well-heeled investor base.”

Fund VI was generating an 11.42 percent net internal rate of return and a 1.15x multiple as of June 30, according to performance information from alternative assets data provider Bison.

Erika Spitzer, head of investor relations at Leonard Green, did not respond to a request for comment.

The firm is led by John Danhakl and Jonathan Sokoloff. It has experienced some turnover in the last few years. Last year, former Managing Partner Peter Nolan moved into a senior advisory role at the firm, stepping back from day-to-day management. In 2013, Partner Michael Connolly left and went on to form Breakaway Capital Partners. Vice President Oliver Nordlinger left in 2014 and former Chief Compliance Officer Michael Gennaro left in 2013.

In September, Leonard Green led an investment group that acquired RestorixHealth Inc from Sverica Capital Management for an undisclosed amount.

In August, portfolio company Petco Holdings Inc filed to go public, its third listing since 1994. Petco was taken private in a $1.8 billion leveraged buyout by Leonard Green and TPG Capital in 2006.