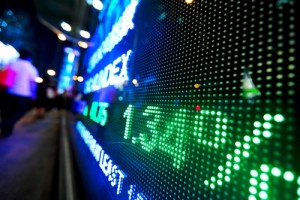 Marking portfolios to market is now paying off for private equity firms. Large-cap LBO shops’ stocks have soared so far in 2013.

Blackstone kicked off PE’s annual earnings season with figures that pleased its bosses. On an earnings call on January 31, Blackstone president Tony James said that thanks in part to a metric called economic net income, “2012 is the best year we’ve had since going public” in 2007.

James attributed the firm’s success—the company’s quarterly profit leapt 43%—in part to growing valuations within Blackstone’s portfolio; shares have risen about 20% in the last three months.

If other publicly traded private-equity firms are experiencing similar portfolio-swelling, the asset class’ shares may continue their winning streak. Take KKR, which reports earnings February 7. In October, the company reported an increase in the carrying value of its portfolio of six percent. In the time since its last earnings call on Oct. 26, the company’s stock has risen nearly 19 percent.

The Carlyle Group and Oaktree Capital Group, the investment firms that braved public markets in 2012 with their respective IPOs, have also performed well as of late.

Carlyle is set to reveal its earnings on February 21 and Oaktree Capital Group will deliver what shareholders hope will be a Valentine of a report when executives talk about its earnings on a February 14 conference call. Both touted increasing operating profit margin in November calls and now shareholders in Oaktree Capital Group—which spent much of 2012 underwater after the company went public at the low end of its range—are probably pleased to see the stock up now more than 10% up post-IPO.

Carlyle shares rose to $31.90 at the end of the day Friday. For Carlyle, 2013 has brought with it a share price increase of more than 22 percent. Oaktree Capital Group’s stock has performed well for 2013, generating about a six percent increase, but the investment firm’s performance over the last six months—a 33% jump—is the bigger story.

Privately, sources at large LBO shops have told peHUB they are reluctant to go public, citing a litany of additional requirements, like disclosure. However, given the increasing likelihood of growing scrutiny from federal regulators anyway and the strong performance of some of their now-listed counterparts, perhaps LBO shops should reconsider and look toward public markets to generate equity—and loyalty—from the senior rainmakers they want to keep.