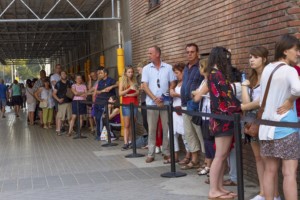 One of the highly anticipated funds coming to market this year is Leonard Green & Partner’s seventh flagship vehicle, which could hit the market next month, according to three people with knowledge of the firm.

Green Equity Investors VII could hit the market in September or October, according to an LP. The target is not clear, but it will be at least as much as Fund VI, which closed on $6.25 billion in 2012, the three sources said. One of the people said the target could be $7 billion. The firm has indicated it doesn’t want to go too far above what it raised for Fund VI, the LP said.

Erika Spitzer, head of investor relations at Leonard Green, did not respond to requests for comment.

“I think it will be a quick process unless, of course, there is some sort of market dislocation,” the LP said.

Fund VI was generating a 12.45 percent net internal rate of return and a 1.15x multiple as of March 31, according to alternative investments data provider Bison, which cited data from the Teachers Retirement System of Louisiana.

While the firm raised $6 billion from external sources in Fund VI, the GP kicked in $250 million, the firm said in a statement at the time.

Danhakl, in keynote address at Buyouts Texas last year, said the buyout market is at a peak, but the environment has not prevented the firm from doing deals. “This environment doesn’t scare us,” he said. “People talk about the deal market. It’s not really a deal market. It’s a market of deals. As long as you pick the right kind of deal you’re gonna do fine. We think we’re as good as you get at that.”