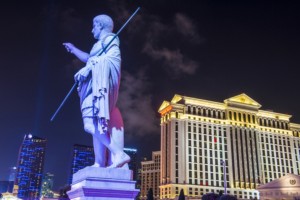 On the eve of Caesars Entertainment Corp’s $10 billion debt-cutting bankruptcy, markets are reflecting two competing views of how the casino company’s high-stakes plan will play out.

One view is reflected in the parent company’s stock price, which is up nearly 50 percent since the October lows. Shareholders seem optimistic about Caesars’ proposed restructuring plan, which cuts the amount owed to junior noteholders by more than 90 percent.

[contextly_sidebar id=”del7ZmzkLzC5WST96FdoY15zzjiV65Ue”]But credit analysts note that debt market prices suggest the parent company and its affiliates that are not filing for bankruptcy may have to share some pain to satisfy junior noteholders.

“The fact there is equity value in Caesars, that equity value describes a really optimistic view of how this will play out,” said Chris Snow, an analyst with CreditSights.

Caesars’ operating unit is expected to file for bankruptcy on Thursday in Chicago.

The operating company has proposed splitting into a casino company and a real estate investment trust, following a model that other gaming companies have used.

Thanks to the backing of first-lien noteholders, the plan has the required creditor support. If approved, it would be a huge victory for Apollo Global Management and TPG Capital Management, the private equity firms that created Caesars with the $30 billion leveraged buyout of Harrah’s Entertainment in 2008.

But Caesars must also prove to the bankruptcy court the plan is fair, opening the way for a fight with junior noteholders, who are owed $5 billion and are taking the brunt of the debt-cutting plan. This group includes Appaloosa Management and Oaktree Capital Management, two deep-pocketed hedge funds with plenty of experience in bankruptcy.

Lawsuits opposing the plan have accused Caesars of “unimaginably brazen corporate looting” of the operating unit, and the junior noteholders have already asked for an independent examiner to look through the various corporate transfers.

Alex Bumazhny, an analyst with Fitch Ratings, said the hedge funds are probably hoping for a repeat of the Dynegy Holdings bankruptcy, where an examiner’s report found similar corporate asset shuffling prior to a bankruptcy was fraudulent.

As a result, the assets were eventually brought back into Dynegy’s bankruptcy for the benefit of creditors.

While Bumazhny said he did not think Caesars asset transfers were as egregious as those in Dynegy, the second-lien notes are currently trading at a level that indicates investors anticipate getting nearly twice what they are promised under the plan.

That price, he said, suggests traders are picking up the notes in anticipation of doing better than the deal on the table.

The analysts doubted the creditors will be able to unwind asset transfers, which include such choice properties as the Linq complex in Las Vegas, but said they could finagle more cash in return for a settlement.

Snow said the money has to come from the first-lien noteholders or the parent company.

“I can’t imagine the first-lien noteholders will budge on this,” he said, leaving the parent company and non-bankrupt affiliates, which might have to borrow to fund a deal.

Credit markets seem to agree, he said. Caesars has created various affiliates to take the properties transferred out of the operating company. “The debt on those is trading well below par. That suggests those holders think there is serious risk the plan won’t go into the effect,” he said.

UPDATE: The bankruptcy protection was filed by Caesars Entertainment Operating Company Inc (CEOC) and several affiliates in the U.S. Bankruptcy Court for the Northern District of Illinois Thursday. They listed assets and liabilities of over $1 billion, according to the filing.

Much of the debt is a legacy of the $30 billion leveraged buyout of Harrah’s Entertainment that was led by Apollo Global Management and TPG Capital in 2008.