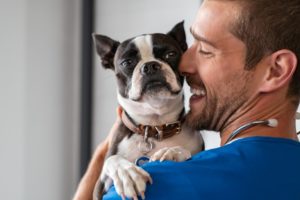 As the recession-resilient vet care industry remains a highly sought-after area of investment, companies large and small, including Morgan Stanley Capital Partners’ Pathway Vet Alliance, VitalPet and Lap of Love, are trading hands, according to several sources familiar with the deals.

Representing the largest in the slew of transactions, Morgan Stanley Capital Partners has agreed to sell Pathway Vet Alliance to San Francisco’s TSG Consumer Partners in a deal valued at $2.65 billion, some of the people told PE Hub.

With a transaction signed about two weeks ago, financing has been committed and a debt deal will be in the market shortly, the sources said. TSG prevailed over other previously rumored consumer-oriented firms in the mix, including Apax Partners and Roark Capital, they said.

MSCP, which completed its founder recapitalization of Pathway in August 2016, will remain a minority investor in the fast-growing company, the people said.

Based upon about $150 million of EBITDA, the price tag implies a close-to 18x multiple of EBITDA, consistent with recent deal multiples in the space.

Pathway, headquartered in Austin, Texas, is considered a unique player in the broader vet care industry. It encompasses a conventional de novo retail clinic strategy not unlike other large players, but also owns an affiliated group purchasing organization, Veterinary Growth Partners, which helps its partners achieve savings by leveraging the group’s buying power on everything from pharmaceuticals to medical supplies.

MSCP’s Pathway investment was led by Aaron Sack, head of MSCP, and James Stewart, executive director, according to its website.

In other vet care activity, Destination Pet has signed a $45 million deal to acquire VitalPet out of Chapter 11 bankruptcy, adding 24 hospital clinics to the company’s existing platform, some of the sources said.

While there were previous conversations around breaking up VitalPet in pieces, its veterinary owners preferred a sale of the group in its entirety, one of the people noted.

L1 Health, which takes a longer-term patient capital strategy, acquired Destination Pet in October, committing $450 million to the newly launched platform in the US and Europe. The Destination Pet investment is led by Meg Fitzgerald, a senior advisor to LetterOne.

The target capital allocation per L1 Health investment is $500 million to $1.5 billion, and might include the initial acquisition and follow on equity injection into the strategy, PE Hub previously wrote.

While a transaction has not been formally announced, the deal was signed earlier this year, concluding a Piper Jaffray-run process, sources said.

While Lap of Love is a small operation, with EBITDA sitting in the $2 million to $4 million range, the deal was said to command a multiple of EBITDA close to 20x, sources said.

For Cortec, the Lap of Love transaction comes on the heels of its sale of Community Vet Partners. PE Hub wrote in December that OMERS Private Equity in October preempted a sale process for the Philadelphia-based vet hospital company in a deal valued around $600 million.

In other notable 2019 activity, JAB Investors unexpectedly outbid financial sponsors to take home the win for Quad-C’s Compassion-First Pet Hospitals. At an enterprise value of about $1.2 billion including post-closing tax benefits, the price tag topped the 17x to 19x range at which precedent transactions had traded, PE Hub wrote.

JAB, which invests on behalf of Germany’s Reimann family, subsequently bought National Veterinary Associates in a June transaction said to equate to a $5 billion-plus valuation. The deal marked an exit for Ares Management and OMERS Private Equity.