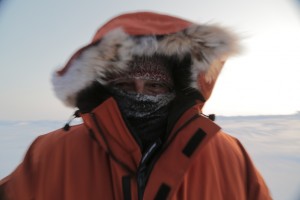 The hardest thing about traveling to the North Pole is keeping your hands warm, according to Mounir Guen, the founder and CEO of placement agent MVision.

Visitors to the North Pole need to wear gloves under gloves and then put their hands in pocket warmers before venturing outside in the extreme cold temperatures. “The warmers take about 10 minutes to heat, and if you’re not prepared, your hands will freeze,” he said.

Guen, who spoke exclusively to peHUB about the expedition, traveled to the North Pole earlier this month along with his two adult children. For the one week trip, they flew to Svalbard Island, which is north of Norway, and then to a Russian temporary ice camp called Barneo. Here, they endured severe snowstorms, temperatures of up to minus 40 degrees Fahrenheit and polar bears.

They spent two days on Barneo as they waited for the weather to clear, Guen said. Once it did, Guen and his fellow travelers (who included experienced Pole explorers Hannah McKeand and Andrew Regan) took a one-hour helicopter trip to the North Pole, which is constantly moving. 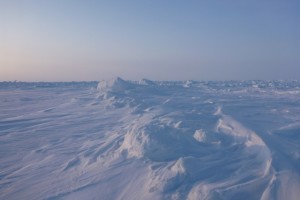 “The first experience [to the North Pole] is so alien, so foreign, so difficult to understand what the risks are. It’s hard to adapt.”

He had expected to camp at the Pole but bad weather forced them to return to Barneo after a day. Guen, and his fellow travelers, spent their time appreciating “the isolation, the remoteness and the uniqueness” of the North Pole.

Safety was of paramount importance during the trip. The group was given very strict instructions on everything: What to wear (all clothing including base layers, hats and boots must be kept on at all times), how to act (because of the polar bear danger, visitors couldn’t travel more than 100 meters from Barneo), and what to eat (high protein items; Guen and group ate ham and cheese as well as granola bars.)

There were no showers. The North Pole is all ice but most of the drinkable water is imported, he said. (The light layer of snow covering the ice can be drunk but first must be melted, Guen said.) Psychologically, he had to get used to the fact that the North Pole is situated on sheets of ice that are always moving. “Imagine clearing the snow with your foot and all you see is beautiful blue because there is no land.”

Guen has traveled extensively and visited nearly every continent. Still, it wasn’t his idea to trek to the North Pole. His 21-year old son, Max, a student at New York University, and daughter, Serena, the 24-year-old founder and editor-in-chief of Suitcase magazine, were originally making the trip. “If they were going to go, I was going to go,” Guen said. “So we went.” 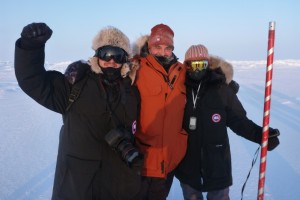 Guen, who started MVision in 2001, said the trip was a “real learning experience” for someone who is used to having everything planned out and organized.

The experience has changed him. He said he learned patience, how to prioritize and not to compromise on safety. The extreme conditions of the North Pole helped him realize that the challenges he faces day-to-day as head of a global placement firm “are quite straightforward,” he said.

He plans to return to the North Pole but wants to visit the South Pole first. Guen said he understand the “elements” and the need for safety now. “It’s quite binary. You follow the instructions or you die.”