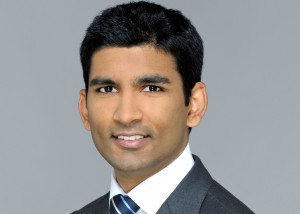 Krishnan, 29, had always wanted to launch a business with Ashok, 28, but Ashok first needed time to pursue his dream of being a professional golfer. In one milestone, Ashok in 2012 qualified for the U.S. Mid-Amateur golf tournament at Conway Farms Golf Club in Lake Forest, Ill.

During this time, Ashok supplemented his sports pursuits by advising portfolio companies he’d worked with during a three-year stint at Quilvest Private Equity. Seeing the demand for piecemeal work in the middle market, Krishnan and Ashok concluded that high-end finance and consulting skill sets were traditionally limited to a few large organizations able to afford the high cost of engaging an expensive consulting firm or hiring a full-time professional. But a large number of boutique investment firms, consulting firms and small businesses had limited access to these niche skills.

At first they thought about launching a consulting firm, but instead Krishnan and Ashok brainstormed ideas about a marketplace to connect experts with private equity firms and LPs seeking extra brainpower for deals, financial reports and co-investments.

By the middle of 2013, they were building the SpareHire platform, which launched in October 2013. They self-funded it to start, then raised a $750,000 round of angel funding from unnamed investors in a deal announced in October.

In the past year, more than 1,000 freelance professionals have been admitted through a screening process into SpareHire’s network. They join the site for free. GPs, LPs and private companies seeking expertise for a deal or other initiatives post projects on the site at no cost.

SpareHire takes a 15 percent commission from compensation paid to consultants on its network — a lower rate than other talent providers, Krishnan said. The site also includes a two-way rating system for freelancers and clients as a way to maintain quality.

“We only get paid when you pay someone for successful work,” said Krishnan, who is co-CEO of the company with Ashok. He said the company has several clients on the employer side, including Adlevo Capital and Jam Capital Partners, among others. Screened freelancers have prior work experience at Google, Morgan Stanley, Lazard, Goldman Sachs, Bain Capital, The Carlyle Group, Warburg Pincus, and Berkshire Partners. Merger and acquisition activity from sponsors and other players accounts for at least half of the site’s business, Krishnan said.