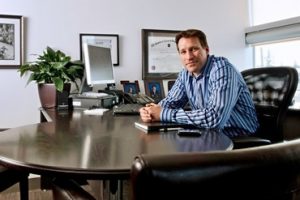 While entrepreneurs often dreamed of taking their companies public, floating shares wasn’t always the best plan for some healthy businesses. Selling to a private equity firm wouldn’t work for others if the owners or founders wanted to keep control.

Company owners stay at the helm and pay Alaris Royalty Corp a monthly dividend, typically at an annual rate of 15 percent, a lower cost of capital than the roughly 20 percent return often sought by a private equity owner. The dividend is re-set each year based on changes in company revenue. Nowadays, Alaris’s distributions represent an average of less than 30 percent of the historical EBITDA of its portfolio partners.

“It’s a cheaper form of equity, a permanent form of equity and it’s a non-control form of equity,” King said. “Those are attractive terms for entrepreneurs who don’t want to sell and want to limit their dilution.”

Alaris Royalty Corp is under no concrete time line to get its initial investment back. It holds onto its preferred shares for the long term, until the company owner decides to exit.

“We have a tag-along right,” King said. “Whenever the family wants to sell, we’ll sell along with them.”

King said the firm looks at about 500 deals each year and makes three to five investments. It’s careful to choose companies in stable industries with long roads ahead of them because it may retain its ownership stake for decades. Healthcare ranks as one of its most popular sectors out of a total of 14 companies in its holdings. All told, Alaris has deployed $600 million in capital.

In one recent deal, Alaris invested US$29.2 million in commercial janitorial services company Kimco Holdings in a management-led buyout from its UK-based parent, Compass Group plc.

Looking ahead, Alaris Royalty Corp seeks to source more deals with private companies or to provide capital to management teams to exit a private equity fund or carve themselves out from a larger company.