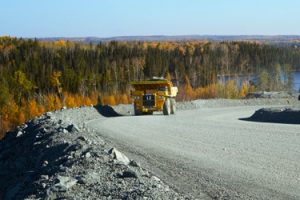 Canadian precious metals producer North American Palladium Ltd (NAP) (TSX: PDL) has agreed to a recapitalization deal with Brookfield Asset Management‘s private equity group. Subject to receipt of a superior proposal prior to June 30, 2015, the deal will, among other things, see amounts owing to Brookfield converted into equity, giving Brookfield 92 percent of NAP’s outstanding common shares. Following the deal’s closing, the company will undertake a $50 million rights offering to raise equity. The offering will be backstopped by Brookfield and other parties. Brookfield has also provided a US$25 million interim credit facility to permit continued operations of the company’s Lac des Iles mine in Ontario.

The Company has obtained covenant relief from its senior secured lenders in respect of certain financial and other covenants until August 15, 2015. Although the Company produced approximately 45,600 payable ounces of palladium in the first quarter of 2015, covenant relief was required as a result of a decline in palladium prices and weakening of the Canadian dollar, and lower production volumes in March combined with higher expenses, which impacted the minimum shareholders’ equity and leverage ratio covenants.

The Company has also entered into an immediately available US$25 million interim credit facility with Brookfield. NAP is continuing normal business operations at its Lac des Iles mine and the Company’s obligations to employees, trade creditors, equipment leases and suppliers will not be affected by the Recapitalization.

If no superior transaction emerges from the strategic review process by June 30, 2015, the terms of the Recapitalization will be as follows:

“The sale process and Recapitalization plan represent the best alternatives available at this time to preserve substantial value in the assets and operations of the Company, and to pursue longer-term growth and expansion opportunities at LDI,” said Phil du Toit, President and CEO. “We believe decreasing the debt burden and strengthening the capital structure is essential for the Company’s future.”

Mr. James Gallagher, the Company’s Chief Operating Officer and a Qualified Person under National Instrument 43-101, has reviewed and approved all technical items disclosed in this news release.

NAP is an established precious metals producer that has been operating its Lac des Iles mine (LDI) located in Ontario, Canada since 1993. LDI is one of only two primary producers of palladium in the world, offering investors exposure to palladium. The Company’s shares trade on the NYSE MKT under the symbol PAL and on the TSX under the symbol PDL.

Certain information contained in this news release constitutes ‘forward-looking statements’ within the meaning of the ‘safe harbor’ provisions of Canadian securities laws and the United States Private Securities Litigation Reform Act of 1995. All statements other than statements of historical fact are forward-looking statements. The words ‘potential’, ‘preliminary’, ‘believe’, ‘forecast’, ‘will’, ‘anticipate’, ‘expect’, ‘would’, ‘could’, ‘estimate’ and similar expressions identify forward-looking statements. Forward-looking statements in this news release include, without limitation: information pertaining to the Company’s strategy, plans or future financial or operating performance, such as statements with respect to the Company’s strategic review process, the Company’s ability to consummate a strategic transaction, projected production, operating and capital cost estimates, project timelines, mining and milling rates, cash flows, projected grades, mill recoveries, metal price and foreign exchange rates, and other statements that express management’s expectations or estimates of future performance. Forward-looking statements involve known and unknown risk factors that may cause the actual results to be materially different from those expressed or implied by the forward-looking statements. Such risks include, but are not limited to: the risk that the LDI mine may not perform as planned, the possibility that commodity prices and foreign exchange rates may fluctuate, the possibility that the Company may not be able to generate sufficient cash to service its indebtedness and may be forced to take other actions, and uncertainty regarding the ability to consummate the Recapitalization. For more details on these and other risk factors see the Company’s most recent Annual Information Form/Form 40-F on file with Canadian provincial securities regulatory authorities and the SEC.

Forward-looking statements are also based upon a number of factors and assumptions that, while considered reasonable by management, are inherently subject to significant business, economic and competitive uncertainties and contingencies. The factors and assumptions contained in this news release include, but are not limited to: that the Company will be able to consummate the Recapitalization or other strategic transaction on the terms described in this news release, the Company’s ability to continue normal business operations at its Lac des Iles mine, that metal prices and exchange rates between the Canadian and United States dollar will be consistent with the Company’s expectations, that there will be no significant disruptions affecting operations, and that prices for key mining and construction supplies, including labour, will remain consistent with the Company’s expectations. The forward-looking statements are not guarantees of future performance. The Company disclaims any obligation to update or revise any forward-looking statements, whether as a result of new information, events or otherwise, except as expressly required by law. Readers are cautioned not to put undue reliance on these forward-looking statements.