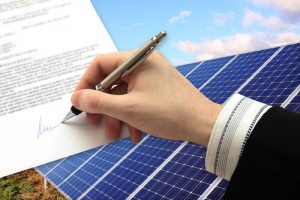 Guam, a U.S. territory subject to U.S. law and environmental regulations, currently relies on expensive imported residual fuel oil and diesel to generate 100 percent of its power requirements. In order to help mitigate Guam’s exposure to fuel price volatility future environmental regulations, NRG Solar will construct, own and operate the solar project which will sell all of its power output to the Guam Power Authority (GPA), the island’s sole electric utility, under two twenty-five year power purchase agreements (PPA). The PPAs will allow GPA to supply its customer’s power more cleanly and cost-effectively than any other generation source currently in operation on Guam. According to the GPA estimates, the project is expected to generate enough clean solar power during the PPAs to offset consumption of almost 2 million barrels of residual fuel oil and diesel, representing total fuel cost savings to GPA of over $300 million and net savings of approximately $100 million.

“NRG Solar has been focused on reducing the levelized cost of solar energy in both the utility and distributed solar markets,” said Tom Doyle, President and CEO of NRG Solar. “Our focus has been on driving down the balance of system costs through in-house engineering, procurement and construction, as well as through creative financing strategies on well-developed projects. The result of this effort provides us with opportunities like the Guam project which was successfully-developed by QUG and is now ready for NRG Solar to assume long-term ownership of the project. We are proud to partner with GPA in paving the road for the development of this and other renewable energy capacity on Guam.”

“GPA has been an excellent partner during the development phase of Guam’s first utility-scale renewable project,” said Sean O’Donnell, CFO of QUG. “We are pleased to bring the development phase to a successful close and facilitate the transfer of the project to a highly-capable renewable energy company like NRG Solar to continue with construction and operations. We are confident that the good working relationships established with GPA and other island stakeholders will result in the successful commissioning of the project and in additional solar development on the island.”

About NRG and NRG Solar
NRG is at the forefront of changing how people think about and use energy. We deliver cleaner and smarter energy choices for our customers, backed by the nation’s largest independent power generation portfolio of fossil fuel, nuclear, solar and wind facilities. A Fortune 500 company, NRG is challenging the U.S. energy industry by becoming the largest developer of solar power, building the first privately-funded electric vehicle charging infrastructure, and providing customers with the most advanced smart energy solutions to better manage their energy use. In addition to 47,000 megawatts of generation capacity, enough to supply nearly 40 million homes, our retail electricity providers – Reliant, Green Mountain Energy and Energy Plus – serve more than two million customers. More information is available at www.nrgenergy.com. Connect with NRG Energy on Facebook and follow us on Twitter @nrgenergy.
NRG Solar LLC, a subsidiary of NRG, has more than 2,000 MW of photovoltaic and solar thermal projects in operation, under construction or in development across the southwestern United States. More information is available at www.nrgsolar.com.

About Quantum Utility Generation, LLC
Quantum Utility Generation, LLC is an operating company based in Houston, Texas that was established to invest in the North American power generation space, and is co-funded by Quantum Energy Partners, a private equity fund with more than $6.5 billion in commitments, the Canada Pension Plan Investment Board, which manages $183 billion on behalf of the Canada Pension Plan, and management. QUG’s approach to investments and operations capitalizes on the deep industry experience of our team to provide investor-owned and public power customers with a unique set of physical, financial and commercial options through structured transactions involving our portfolio of operating and development assets. QUG’s current portfolio interests include approximately 1,400 MW of conventional generating assets and several wind and solar development projects. For more information, please see our website at www.quantumug.com.