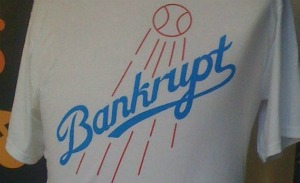 The buyers under the deal, unveiled hours before the storied franchise was scheduled to hold an auction with three bidders, were led by the investment banking firm Guggenheim Partners. Mark R. Walter, chief executive officer of Guggenheim Capital, will be controlling partner of the ownership group.

As part of the deal, which if approved would lift the club out of bankruptcy, McCourt and certain affiliates of the buyers also plan to form a joint venture to acquire Dodger Stadium and the surrounding Chavez Ravine property for $150 million, the team said in a statement.

McCourt had separated the team from its real estate earlier in the process in a move opposed by some of the bidders, according to two people with knowledge of the bids.

Earlier on Tuesday, Major League Baseball owners had approved three bidders for an auction of the team that was expected to start Wednesday morning in New York, those sources also said.

Johnson, 52, who ended his 12-year career with the Los Angeles Lakers in 1991 after he was diagnosed with HIV, was a minority owner of the National Basketball Association (NBA) team for several years after his retirement and built a business that owns movie theaters, health clubs and other properties.

Johnson was among the earliest bidders for the Dodgers after McCourt put the team up for sale in November in an agreement with Major League Baseball. The league had asked the bankruptcy court to order the sale, accusing McCourt of violating its rules by taking team funds for personal use.

The Dodgers had landed in bankruptcy court in June 2011, more than a year after McCourt and his wife, Jamie, separated. The two argued in court over ownership of the team, and reached a divorce settlement in which Jamie McCourt was promised a $130 million payment to end her ownership claim.

“I am thrilled to be part of the historic Dodger franchise and intend to build on the fantastic foundation laid by Frank McCourt as we drive the Dodgers back to the front page of the sports section of our wonderful community of Los Angeles,” Johnson said in a statement.

The $2 billion price tag would mark the largest sum ever spent for a major league U.S. sport franchise, surpassing the previous record, $1.1 billion, paid by real estate developer Steven Ross in 2009 to acquire the NFL’s Miami Dolphins. The highest price previously paid for a Major League Baseball club was $845 million, which the Ricketts family spent in 2009 to buy the Chicago Cubs.

“This was a pre-emptive bid to keep out bidders who may be better capitalized,” Ganis told Reuters. “That means the auction may have been breached, and I wouldn’t be surprised to see one or more bidders object.”

Before the deal was announced, the prospective sale price had ranged from $1.2 billion to $1.6 billion, according to sources with knowledge of the bids. Future television rights for the club have been estimated to be worth as much as $3 billion and are considered the team’s most valuable asset.

McCourt had been expected to choose from among three prospective buyers at auction, with the winning bid seen as likely to end up around $1.5 billion, the two sources with knowledge of the bidding said on Monday.

“This agreement with Guggenheim reflects both the strength and future potential of the Los Angeles Dodgers, and assures that the Dodgers will have new ownership with deep local roots, which bodes well for the Dodgers, its fans and the Los Angeles community,” McCourt said.

News Corp’s Fox sports unit and Time Warner Cable also were headed toward what could be a multibillion-dollar showdown next year over the rights to telecast the franchise’s games.