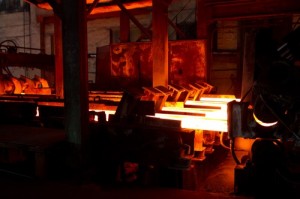 Onex Corp. said Monday that it has entered an agreement to sell its majority stake in TMS International Corp. to an affiliate of The Pritzker Organization. According to the proposed deal, Onex will sell their 23.4 million TMS shares for US$410 million. The transaction is expected to close in the fourth quarter of 2013. Based in Pennsylvania, TMS is a provider of outsourced industrial services to steel mills in North America. Onex is a private equity firm with offices in Toronto, London and New York. Update: Onex has invested US$249 million in the company since 2007.

Onex Corporation (“Onex”) (TSX:OCX) today announced that TMS International Corp. (NYSE:TMS) has entered into a definitive merger agreement providing for its acquisition by an affiliate of The Pritzker Organization, LLC. Under the terms of this agreement, TMS shareholders, including Onex, will receive $17.50 per share in cash consideration at closing, which is expected to occur in the fourth quarter of 2013 and is subject to customary closing conditions. Onex and certain of its affiliates have provided a written consent that satisfies the requirements for stockholder approval.

Under the proposed transaction, Onex and Onex Partners II (the “Onex Group”) will sell their remaining 23.4 million TMS shares, representing a 60% equity interest in the company, for proceeds of $410 million. Onex’ portion of these proceeds would be $172 million, including carried interest of $10 million.

The Onex Group has invested $249 million in the company since 2007. Following this sale, the Onex Group will have received total proceeds of $504 million, including proceeds from the company’s earlier initial public offering and prior distributions. This would result in a gross multiple of capital invested of approximately 2 times.

“TMS’ strong relationships with leading global steel producers and its relentless focus on delivering exceptional value for its customers resulted in significant growth for the business, particularly internationally, despite challenging market conditions,” said Tim Duncanson, a Managing Director of Onex. “We have thoroughly enjoyed our partnership with the TMS management team and wish them continued success.”

About Onex
With offices in Toronto, New York and London, Onex is one of the oldest and most successful private equity firms. Onex acquires and builds high-quality businesses in partnership with talented management teams. The Company has approximately $16 billion of assets under management, including $5 billion of Onex capital, in private equity, credit securities and real estate. Onex invests its capital directly and as the largest limited partner in each of its Funds.

Onex’ businesses have assets of $45 billion, generate annual revenues of $36 billion and employ approximately 236,000 people worldwide. Onex shares trade on the Toronto Stock Exchange under the stock symbol OCX. For more information on Onex, visit its website at www.onex.com. The Company’s security filings can also be accessed at www.sedar.com.