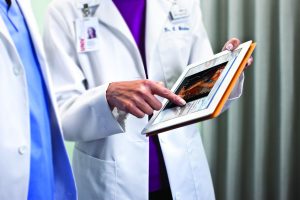 Canadian buyout firm Onex Corp (OCX.TO) has revived an auction for Carestream Health Inc that could value it at more than US$3 billion, including debt, and is exploring a breakup of the U.S. medical imaging company, people familiar with the matter said.

Onex sought to sell Carestream in 2013 but decided to hold on to it after the offers it received from private equity firms did not meet its valuation expectations. The latest move underscores the diverging fortunes of Carestream’s businesses.

The sources asked not to be identified because the sale process is confidential. Carestream and Onex did not respond to requests for comment, while Goldman Sachs and Jefferies declined to comment.

Carestream reported revenues of US$2.1 billion in 2015, down 9 percent from 2014. It reported earnings before interest, taxes, depreciation and amortization in 2015 of US$360 million.

Carestream was formed in 2007, when Onex purchased the healthcare division of imaging company Eastman Kodak for US$2.35 billion.

Onex worked with Goldman Sachs, Bank of America Corp (BAC.N.) and Credit Suisse Group AG (CSGN.S) to find a buyer for Carestream in 2013, Reuters reported at the time.

However, the challenges of making the transition from x-ray films to digital technology, particularly in international markets, led other potential private equity buyers to take a dim view of Carestream’s valuation at the time, the people said.

Following that sale process, Carestream issued a statement in which it said that, as a result of its exploration of strategic alternatives, it had decided to refinance the company’s debt and “continue to invest in long-term growth.”

Onex has had Carestream pay it several dividends by taking on additional debt. By 2013, when it first explored Carestream’s sale, Onex had already made 2.6 times its investment in the company, according to the statement at the time.

(Reporting by Carl O’Donnell and Greg Roumeliotis in New York)