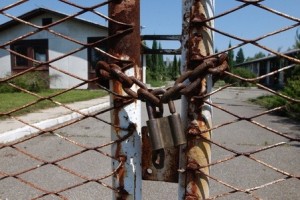 The company is working to re-secure funds to continue operating, according to Myers. It’s not clear who the lender is, but Capital One Business Credit provided financing when OpenGate acquired PennySaver USA in 2013 from Harte-Hanks, OpenGate said in a statement at the time.

“Without any funding the company was forced to immediately cease operations,” Myers said in a statement issued May 24. “We … are continuing to work through several options for the company, including ongoing discussions with a potential buyer and working with our lender to re-secure the line of capital to continue operations.”

Julie Rakes, a spokeswoman for Capital One, did not return a request for comment.

OpenGate invests in “underperforming businesses” that are occasionally affected by “external circumstances,” according to Terry Fahn, a spokesman for OpenGate. “We are working diligently to resolve this situation with PennySaver’s management and we remain hopeful for a positive outcome that is acceptable for all parties involved,” according to a statement from Fahn.

The shutdown appeared to come as a shock to workers, who have formed aFacebook group called Former PennySaver CA Employees, to vent about the situation and share information. A meeting with Myers was scheduled for today in California.

OpenGate, led by Chief Executive Officer Andrew Nikou, is in the market raising its debut institutional fund targeting $300 million. The firm has shut down several companies in the past year, but has also had two exits recently. In March, the firm sold specialty paper manufacturer Kotkamills Oy to Finnish firm MB Funds for a very strong return, an LP said in a prior interview.

“It was a crazy return for them, [though] the equity check was tiny,” one LP said.

Earlier this month the firm completed the sale of educational publisher Fleurus Presse to Unique Heritage Media as part of a management buy-in, the firm said in a statement. Terms of the deal were not disclosed.

OpenGate last year closed recycled cardboard maker Fusion Paperboard. It’s not clear why the firm decided to shutter the business. Rather than take Fusion through bankruptcy, OpenGate began selling its equipment, including to Sun Capital Partners.

In 2013, OpenGate reportedly closed Golden Guernsey Dairy without notice, then filed to liquidate the company under Chapter 7 bankruptcy. The bankruptcy trustee overseeing the case accused OpenGate of failing to follow rules that mandate alerting employees 60 days prior to closing a business, Buyouts previously reported.

Nikou launched OpenGate in 2005 after working at Platinum Equity.