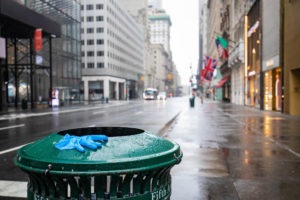 Certain portfolio companies have adjusted their operations to help out in the fight against covid-19. Karishma Vanjani on PE Hub has been tracking such companies. She has a story today about Mopec, backed by Blackford Capital, which traditionally sold medical equipment and laboratory products to funeral homes, morgues, university medical schools and hospitals.

Since the emergence of covid-19, the company began working with state and local governments. Some government entities have been buying products to be used in coordination with hospitals. The company also partnered with manufacturers to distribute its CDC-compliant body bags. These help reduce the risk of virus transmission when funeral home directors and healthcare workers handle bodies, Karishma writes.

“The rack is a less expensive, less highly engineered product but one that could be mass produced in a really short period,” Johnson added.

Leave: Wellspring Capital CEO’s Bill Dawson has taken a leave of absence in the wake of a former employee accusing his son of sexual assault, according to several media reports. Wellspring’s former head of marketing and investor relations Taylor Lawrence said in a lawsuit that Dawson’s son Christopher raped her in 2014. When she approached Dawson about the incident, he allegedly told her he would “ruin” her, Bloomberg reported.

Wellspring is investing from its $1.45 billion Fund VI that closed in 2018. Wellspring was formed in 1995 by Greg Feldman and Martin Davis. Dawson, who joined Wellspring in 2001, was named CEO in 2014.

Also, Paul Favret, CEO of Apollo Management-backed Resource Energy Partners, was put on leave from his company after allegedly brandishing a handgun at a minority couple who had turned their vehicle around in his driveway.

The company also retained outside counsel to conduct a review of the incident, according to a Resource Energy spokesperson. An Apollo spokesman did not respond to a comment request.

Favret turned himself in last week and was charged with menacing, prohibited use of a weapon and disorderly conduct, according to a report from NBC news. Bond was set at $50,000, according to the report.

Favret has said the alleged victim’s version of events are not accurate, though he said he “deeply regrets my actions that day.”

GP Stake: Goldman Sachs acquired a less than 10 percent stake in Permira, valuing the firm at 5 billion euros, according to Reuters. Permira will use the funds to expand its private equity activities, Reuters said. Read it here.

Top Scoops
Hamilton Lane CEO Mario Giannini said Q1 portfolio valuations were probably down 8 to 10 percent, depending on whether the portfolio was focused on growth or buyouts. Giannini was speaking at a CalPERS board meeting.

Growth focused portfolios would take less of a hit, while buyouts would feel more impact, but would be poised to increase in the second quarter, Giannini said.
“It’s really too soon to know, but given the public markets were up and operating performance we hear was surprisingly okay at many portfolio companies, I’d be surprised if it wasn’t up somehow,” Giannini said. Read the story here.

Partners Group-backed PCI Pharma Services kicked off its sales process, with Jefferies providing financial advice to the company, writes Sarah Pringle on PE Hub. The auction is expected to produce a deal valued in the $2.5 billion to $3 billion range, she writes. Read the story here on PE Hub.