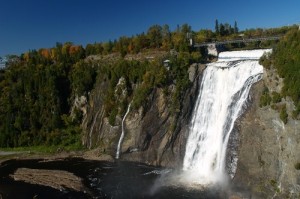 Magpie is a 40.6 MW run-of-river hydroelectric facility located on Crown lands in the Minganie Regional County Municipality, in Northeastern Quebec. This facility began commercial operations in 2007, and all of the electricity it produces is sold to Hydro-Québec under a 25-year fixed-price power purchase agreement, which provides for an annual increase to the selling price of 1%. Magpie has an average annual production of approximately 185,000 MWh, enough to power almost 11,000 Quebec households each year.

The addition of this facility increases the Corporation’s net installed capacity by 7% to 617 MW and its consolidated long-term average annual production by almost 8% to 2,592 MWh. Magpie is expected to generate annualized revenues of approximately $10.6 million in 2013 (including payments received under the ecoENERGY program) and Adjusted EBITDA of approximately $8.2 million.

“We are very pleased with the acquisition of Magpie, which further strengthens our presence in hydro with a new, long-term facility, and further diversifies our hydro operations”, states Mr. Michel Letellier, President and Chief Executive Officer of the Corporation. “We look forward to developing our relationship with a new partner, the Minganie Regional County Municipality”, adds Mr. Letellier.

The Corporation has acquired 99.999% of the common units of the facility. However, the Minganie Regional County Municipality holds 30% of the voting units, as well as a convertible debenture with a nominal value of $3.0 million, which carries an annual interest payment of approximately $465,000, and a $2.0 million non-interest bearing debenture repayable over the next five years. The convertible debenture entitles the municipality to a 30% interest in the facility upon conversion of the debenture on January 1, 2025; once the non-interest bearing debenture has been repaid, the Corporation will have the option to trigger the conversion of this debenture at any time prior to this date.

The Corporation has paid the final purchase price of $28.6 million in cash and assumes project-level debt totalling $55.4 million, which includes $50.4 million in non-recourse financing with blended monthly payments of approximately $406,000 until 2017, and approximately $379,000 thereafter until 2031, for a blended fixed interest rate of 6.35%, as well as the two debentures held by the Minganie Regional County Municipality mentioned above. These debts will be adjusted to fair value upon consolidation by the Corporation. Net cash flows from the facility which have been accruing to the Corporation since August 31, 2012 are included in the cash balance transferred to the Corporation upon closing.

Letter of intent and deposit agreement

The Corporation continues to advance negotiations under this letter of intent with Hydromega to acquire other assets, while at the same time taking into consideration the impact of the recent increase in long-term interest rates and the decline in the Corporation’s share price, in order to ensure that these acquisitions will be accretive. Given current market conditions, the Corporation does not intend to do a public offering of common shares at this time.

Also concurrent with the announcement of the Magpie acquisition in July 2012, the Corporation had entered into a $25 million deposit agreement with Hydromega, bearing interest at a rate of 7% annually, to be applied against the purchase price of any Hydromega asset. This deposit was not used to fund the acquisition of Magpie and remains in place to fund the eventual purchase of other Hydromega assets. The deposit agreement also contains a right of first offer for, as well as an option to acquire, the 30.5 MW operating facility in Quebec.

The Corporation’s strategy for building shareholder value is to develop or acquire high-quality facilities generating sustainable cash flows and providing a high return on invested capital, and to distribute a stable dividend.

Adjusted EBITDA is not a measure recognized by IFRS and has no standardized meaning prescribed by IFRS. References in this press release to “Adjusted EBITDA” are to operating revenues less operating expenses, general and administrative expenses and prospective project expenses. Investors are cautioned that this non-IFRS measure should not be construed as an alternative to net earnings as determined in accordance with IFRS.

The forward-looking information includes forward-looking financial information or financial outlook, such as estimated electricity production, projected revenues and EBITDA, debt payments, and future investments, to inform investors of the potential financial impact of the acquisition on the Corporation’s results. Such information may not be appropriate for other purposes.

The forward-looking information is based on certain key expectations and assumptions made by Innergex as of the date of this press release, including expectations and assumptions concerning the availability of capital resources, performance of operating facilities, as well as estimates, forecasts and opinions of the Corporation. Although Innergex believes that the expectations and assumptions on which such forward-looking information is based are reasonable, undue reliance should not be placed on the forward-looking information since no assurance can be given that they will prove to be correct. Actual results could differ materially from those currently anticipated due to a number of factors and risks. These include, but are not limited to, potential undisclosed liabilities associated with the acquisition of Magpie, failure to realize the benefits of the acquisition (including cost synergies and operational efficiencies), energy generation, equipment failure, performance of third-party suppliers and other risks generally attributable to the business of Innergex. For additional information with respect to risks and uncertainties, refer to the Annual Information Form of Innergex filed on SEDAR’s website at www.sedar.com. The forward-looking information contained herein is made as of the date of this press release and the Corporation does not undertake any obligation to update or revise any forward-looking information, whether as a result of events or circumstances occurring after the date hereof, unless required by legislation.