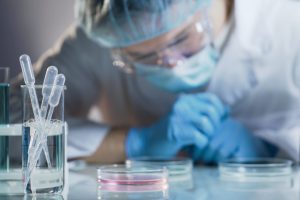 Aurora Diagnostics, the Summit Partners– and KRG Capital– backed anatomic-pathology-services and cancer-diagnostics company, is back in the market, four sources told Buyouts.

The Palm Beach Gardens, Florida, company has turned to Moelis for financial advice on a sales process, some of the sources said, adding that indications of interest are due in about three weeks.

Sources placed Ebitda just north of $65 million, speculating the process could produce a deal valuation as high as a low-double-digit-multiple of Ebitda.

While sources noted that Aurora has faced challenges over the years, in large part driven by reimbursement cuts, those pressures have moderated.

So sponsors may view Aurora as more of a physician-services business — as opposed to a lab business — and an opportunity to back an asset of scale at a relative bargain to other segments ranging from dental to physical therapy, one source said.

Such areas have seen significant PE investment and execution around rollup strategies, producing multiples of Ebitda well into the mid- to upper teens.

LabCorp or Quest Diagnostics might show interest, though one of the sources noted that anatomic pathology has not been an area of investment for the companies over the past several years.

Aurora’s inception dates to 2006, when Summit Partners and GSO Capital Partners teamed up to form the acquisition platform.

The firms launched the company together with James New and Martin Stefanelli, former executives of diagnostic-testing-services company AmeriPath. New initially served as chairman and CEO of Aurora, while Stefanelli was named president and COO.

KRG in 2009 purchased GSO’s interests in the platform through Fund IV. The deal left Summit with a 51 percent ownership stake and KRG with 34 percent, an announcement around the time said.

Despite the executives’ success at AmeriPath — which Welsh, Carson, Anderson and Stowe sold to Quest Diagnostics in an about $2 billion deal in 2007, more than double the price paid not five years earlier — Aurora was a troubled asset over the years.

The company in May 2017 completed a refinancing, exchanging senior notes that had been due in 2018 for a combination of new senior notes due in 2020 and warrants.

Both Moody’s and S&P in June 2017 said they considered Aurora’s recently closed debt exchange distressed, constituting a default. The credit-rating companies subsequently withdrew all ratings on the company.

Among factors that challenged the debt-laden company in past years were a big Medicare reimbursement cut in the 2012-2013 time-frame, as well as additional pricing pressure from the Centers for Medicare & Medicaid Services, or CMS, and commercial payers in the years since, sources said.

In addition, one of the sources also noted that the large PE-backed dermatology assets have brought pathology services in-house. Another said the large derm sites have always done this, so it’s had minimal impact.

Aurora has also seen its share of C-suite changes over the years, including tapping industry veteran and turnaround expert Daniel Crowley as chairman and CEO in March 2013.

It’s also not the first time Aurora’s backers have tested the sale waters. UBS was hired in 2016 to advise on a sales process, the Wall Street Journal reported.

The company has also explored a public listing. In April 2010 — shortly after KRG joined as an investor — Aurora filed for a $150 million IPO, but its plans were ultimately called off.

Aurora offers integrated diagnostic and personalized medicine consultations and IT solutions to physicians and hospital systems.

Representatives of Aurora and Moelis declined to comment, while those with KRG and Summit couldn’t immediately be reached.

Action Item: Reach out to Summit’s Chris Dean at cdean@summitpartners.com