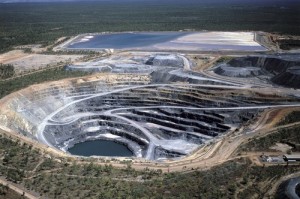 Toronto-based Mega Uranium Ltd., a mineral resources company focused on uranium properties, has agreed to sell its Lake Maitland Uranium Project in Western Australia to Toro Energy Ltd. Upon completion of the transaction, the company will own approximately 28% of the outstanding shares of Toro, an Adelaide, Australia-based uranium business. Mega Uranium is a portfolio investment of Canadian private equity firm Pinetree Capital.

TORONTO, ONTARIO–(Marketwired – Aug. 12, 2013) – Mega Uranium Ltd. (MGA.TO) (“Mega” or the “Company”) is pleased to announce that it has entered into a binding term sheet with Toro Energy Limited (“Toro”) (TOE.AX) to sell its Lake Maitland Uranium Project (“Lake Maitland”) in Western Australia to Toro for 415 million ordinary shares of Toro (the “Transaction”). Upon completion of the Transaction, Mega will own approximately 28% of the issued and outstanding shares of Toro.

Toro is an Australian uranium company listed on the Australian Stock Exchange. Toro’s flagship and wholly-owned Wiluna uranium project is located 30 km southeast of Wiluna in Central Western Australia and approximately 90 km north-west of Lake Maitland. Toro has updated prefeasibility estimates and the process engineering phase of the definitive feasibility study complete for mining of two shallow calcrete deposits, Lake Way and Centipede, for which all government environmental approvals have been received.

Highlights of the Transaction
Consolidates quality Western Australian uranium assets and expands Mega’s uranium interests into an enlarged Wiluna project development;
Environmental permits for Toro’s first two deposits at the Wiluna project, Centipede and Lake Way, have already been granted, which potentially shortens the development time-frame for Lake Maitland;
Operational synergies potential across geologically similar projects;
Opportunity for significant capital savings due to the requirement for only one central processing facility to treat ore from Lake Maitland and Toro’s Wiluna deposits; and
Potential further benefit for Mega as shareholder in the enlarged Toro.

Stewart Taylor, Mega’s President said, “Mega is pleased to partner with Toro on the development of Wiluna. Given the proximities and similarities of the main deposits, the integration of Lake Maitland into the broader Wiluna Project is expected to unlock benefits for both Toro and Mega shareholders.”

The Transaction is conditional upon the receipt of various approvals, including the approval of Toro shareholders, Mega’s Project Partners (as defined below) consenting to and not exercising any pre-emptive rights that they may have in connection with the Transaction, and other customary closing conditions. The Transaction has the support of Toro’s major shareholder, OZ Minerals Limited, which has a 39% equity interest in Toro, and which has confirmed that, subject to the independent expert report obtained by Toro indicating that the acquisition is fair and reasonable and no superior proposal emerging, it intends to vote in favour of the Transaction. On completion of the Transaction, OZ Minerals will hold a 28.5% interest in Toro.

Mega understands that following completion of the Transaction, Toro’s focus will be to work towards implementation of the already approved Wiluna Project and to commence studies to optimise the inclusion of Lake Maitland within the overall Wiluna Project over time. This will include reviewing optimal mine planning and investigating the opportunity to expand the capacity of the Wiluna Project above Toro’s currently planned 1.3 Mtpa processing capacity.

The Transaction does not impact upon Mega’s previously announced proposed merger with Rockgate Capital Corp. (see June 6, 2013 press release), which the parties continue to work toward.

Key Terms of the Transaction
The Transaction is expected to be effected by Toro’s subsidiary, Nova Energy Pty Ltd, acquiring 100% of the issued capital of Mega’s subsidiary, Redport Exploration Pty Ltd (“Redport”). Redport, through its 100% owned subsidiaries, will own the relevant Lake Maitland tenements and associated assets and rights and at completion will have a surplus cash balance of $1.5 million. Consideration for the Transaction is 415 million fully paid ordinary shares in Toro.
On completion of the Transaction, Mega will hold a 28% equity interest in Toro. Toro has agreed to grant Mega rights to appoint two nominees to the Toro board of directors for so long as Mega maintains at least a 22% interest in Toro. Initially, Mega’s Executive Vice President – Corporate Affairs, Richard Patricio, and Executive Vice President – Australia, Richard Homsany, will join the board of Toro as non-executive directors. Mega has also agreed to a 12-month escrow of its Toro shares, with customary market exceptions, and to a standstill which limits Mega’s capacity to acquire further Toro shares within the next 2 years.

In addition, the Project Partners hold certain pre-emptive and consent rights that may apply to the Transaction.

Conditions Precedent to Completion
The conditions precedent to completion of the Transaction include, but are not limited to:
Toro shareholder approval under ASX LR7.1 and s611 Item 7 of the Corporations Act;
Any necessary FIRB approval required by Mega and Toro in relation to the transaction; and
The Project Partners consenting to the Transaction and not exercising any pre-emptive rights that may apply.

Break-Fees
Reciprocal break fees of $1.0 million are payable in certain circumstances by each of Mega and Toro.

Mega Uranium Ltd.
Mega Uranium Ltd. is a Canadian mineral resources company listed on the TSX, with a focus on uranium properties. Mega has a global presence with projects in Australia at feasibility and pre-feasibility stages, and exploration projects in Australia, Canada and Cameroon. Currently, Mega is focused on the development of two of its Australian projects, Lake Maitland located in Western Australia and Ben Lomond located in Queensland. Mega has a farm in and joint venture with JAURD and IMEA on the Lake Maitland Project. Further information on Mega can be found on the company’s website at www.megauranium.com.

NOTE REGARDING FORWARD-LOOKING INFORMATION
This news release contains “forward-looking statements” within the meaning of the United States Private Securities Litigation Reform Act of 1995 and “forward-looking information” as such term is defined in applicable Canadian securities laws (together referred to herein as “forward-looking statements”). Except for statements of historical fact relating to Mega or Toro, information contained herein constitutes forward-looking statements. Forward-looking statements are characterized by words such as “plan,” “expect”, “budget”, “target”, “project”, “intend,” “believe”, “anticipate”, “estimate” and other similar words, or statements that certain events or conditions “may” or “will” occur. Forward-looking statements in this news release include, but are not limited to, statements relating to completion of the combination of Mega and Toro and the expected timing of completion, statements regarding the anticipated completion date of a feasibility studies regarding the Wiluna project, statements regarding the shareholding of Mega at closing, statements regarding the expected benefits to Mega shareholders of the proposed transaction. Forward-looking statements are based on the opinions, assumptions and estimates of management considered reasonable at the date the statements are made, and are inherently subject to a variety of risks and uncertainties and other known and unknown factors that could cause actual events or results to differ materially from those projected in the forward-looking statements. These factors include (i) that Mega and Toro will complete the proposed transaction described herein, (ii) political developments, whether generally or in respect of the mining industry specifically, in Australia not consistent with Mega and Toro’s current expectations, (iii) Mega’s and Toro’s expectations in connection with the projects discussed herein being met, (iv) the impact of general business and economic conditions, global liquidity and credit availability on the timing of cash flows and the values of assets and liabilities based on projected future conditions, fluctuating metal prices and currency exchange rates, (v) the value that the Mega will realize from its Toro shareholdings, (vi) changes in project parameters as plans continue to be refined,(vii) the continued employment of key Mega and Toro employees, as well as those risk factors discussed or referred to in Mega’s annual Management’s Discussion and Analysis and Annual Information Form for their respective most recently completed year end filed with the applicable securities regulatory authorities and available at www.sedar.com. Although Mega has attempted to identify important factors that could cause actual actions, events or results to differ materially from those described in forward-looking statements, there may be other factors that cause actions, events or results not to be anticipated, estimated or intended.
There can be no assurance that forward-looking statements will prove to be accurate, as actual results and future events could differ materially from those anticipated in such statements. Mega does not undertake any obligation to update forward-looking statements if circumstances or management’s estimates, assumptions or opinions should change, except as required by applicable law. The reader is cautioned not to place undue reliance on forward-looking statements. The forward-looking information contained herein is presented for the purpose of assisting investors in understanding Mega’s expected financial and operational performance and results as at and for the periods ended on the dates presented in their respective plans and objectives and may not be appropriate for other purposes.

Stewart Taylor, Mega’s President and Qualified person under NI43-101, is responsible for this release and has verified the contents disclosed.