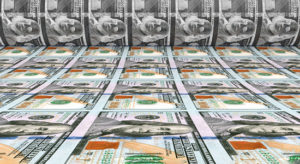 We have a column this morning from our bureau chief in California, Larry Aragon. Check it out:
It’s beginning to look a lot like a trillion-dollar Christmas.

US private equity deal-making is on pace to eclipse $1 trillion for the first time this year.
The total stood at more than $934 billion at the end of November, compared to a little less than $700 billion for all of 2020, according to preliminary data from PitchBook.

Given where we already are, it is “reasonable to expect” this year will break the trillion-dollar mark, said Wylie Fernyhough, senior PE analyst for PitchBook.

Looking out to next year, the first quarter may cool off a bit, as a number of deals were pulled forward into Q4 for tax reasons. Overall, 2022 is poised to be another strong year for deal-making.

If there is a headline for next year, it would probably be “the bigs keep getting bigger,” Fernyhough said. “There’s so many of these $10 billion-plus funds that will be looking to deploy capital.” For example, Apollo, Blackstone and Carlyle are collectively planning to raise $80 billion in 2022, while Silver Lake, Thoma Bravo and Vista Equity are looking to pull in another $60 billion between them, he notes.

All of that fresh capital will have to be put to work, which means competition will likely keep prices high. “It’s hard for me to foresee pricing coming down with so much capital out there,” he said.

Of course, there are risk factors that could have a negative impact on deal-making, such as a continued rise in inflation, an increase in interest rates or lower-than-expected PE returns. However, “it’s hard to see one thing disrupting everything,” Fernyhough said. “As much dry power as there is and as strong as returns have been, it looks like it will just keep going up and to the right.”

That’s it for today! Hit me up with tips n’ gossip, feedback or just to chat at cwitkowsky@buyoutsinsider.com or find me on LinkedIn.